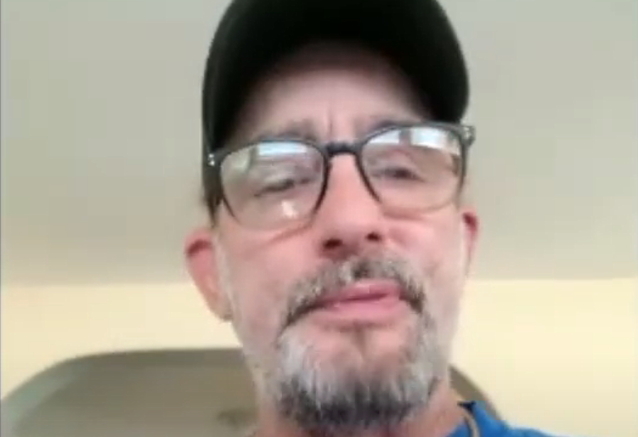 Former EXODUS Guitarist RICK HUNOLT On Firing PAUL BALOFF: 'It Could Have Been The Biggest Mistake We Ever Made'

In a new interview with For The Passion Not The Fashion, ex-EXODUS guitarist Rick Hunolt reflected on his former band's decision to fire original singer Paul Baloff in 1986 due to what at the time was described as "personal and musical differences." Paul was replaced by Steve "Zetro" Souza, who had previously been the lead vocalist for LEGACY, an early incarnation of fellow Bay Area thrashers TESTAMENT.

Hunolt continued: "Zetro was great filling in; he was great. He did a good job. But after we let Paul go, he just fell deeper and deeper into his addiction and everything. Basically, he was homeless. He wouldn't get a job and he wouldn't stop doing what he was doing. We had to let him go. It was just to the point where it was getting so bad that he couldn't do anything. He couldn't remember lyrics. It was just bad.

"But I'll be the first to admit… I always try to think of what would have happened to EXODUS if we kept Paul," Rick added. "I don't even know. I don't even know if he would have been able to sing any of the music off of [EXODUS's second album, 1987's] 'Pleasures Of The Flesh'. I don't know.

"Anyway, that was the toughest decision me and Gary [Holt, fellow EXODUS guitarist] ever had to make. It was horrible."

Regarding Souza's addition to EXODUS, Hunolt said: "Not everybody's gonna like him. He's done a great job. He's had his ups and downs. But I think right now he's doing great. I think on [EXODUS's latest album] 'Persona Non Grata' he sounds better than he ever has."

Hunolt previously touched upon EXODUS's split with Baloff in November 2021 when he spoke with Heavy Culture about why he thinks his former band failed to achieve the same commercial heights as the so-called "Big Four" of 1980s thrash metal, namely METALLICA, SLAYER, MEGADETH and ANTHRAX. He said: "First of all, we were just kids. We couldn't even buy alcohol. We were super young and just crazy, full of crazy energy. We recorded the album, 'Bonded By Blood', and it took forever and ever and ever and ever for it to come out — it took forever. So that really messed us up in the world. SLAYER, METALLICA and EXODUS — we were all there at the same time, we all had albums ready to be released, and, of course, ours was last one [to come out] because of record company craziness. So, the follow-up ['Pleasures Of The Flesh'], losing Paul was super tough.

"Hiring a new singer and putting out 'Pleasures'… And then we had to wait another year for 'Pleasures' to come out; it was, like, another year for 'Pleasures' to come out. So that was like a double… '84, and then we waited till… 'Pleasures' came out, what, '86 or something? Late '85? So, people were just waiting and waiting and waiting. And we're sitting there going, 'Goddamn it.' It was a lot of pressure. Meanwhile, we got METALLICA and SLAYER and ANTHRAX now on board releasing albums every year. And we're just slowly but surely losing traction. It was tough. But shit happens. We were just kids. We didn't know anything.

"I think losing Paul was a big deal back then," Hunolt added. "I think that maybe we made a mistake by firing Paul. And this is just looking back on everything for me; this is just my personal thought. This is the stuff that I think about sometimes. What would have happened if we didn't fire Paul? I just think that maybe we would have gotten a little bit more traction if we didn't have that lag in between.

"People love Paul. And Paul was… he's a legend. He was going through a bad time in his life, and I guess, at the time, we felt that maybe he was holding us back; I think probably that's what we were thinking. I think that probably we might have thought about getting him better instead of firing him.

"But as far as the 'Big Four' goes… Well, I don't know… Maybe it should just be the 'Big Five.' I will say this: I think that everybody has their place in the old-school thrash. If you wanna give 'em a number or whatever, go ahead. I think it doesn't mean anything. I think that the people that were there and the people that love our genre know where everybody stands. And I know where we stand, for sure. Without EXODUS, I think that thrash metal would be very, very different."

Hunolt makes a guest appearance on "Persona Non Grata", which was released in November 2021 via Nuclear Blast Records.

The San Francisco Bay Area thrashers' latest disc is the follow-up to 2014's "Blood In Blood Out", which was their first release since the departure of the group's lead singer of nine years, Rob Dukes, and the return of Souza, who previously fronted EXODUS from 1986 to 1993 and from 2002 to 2004.

Souza is now on his third stint with EXODUS. A decade following his second departure, Souza returned to the fold in 2014, just in time to appear on "Blood In Blood Out".