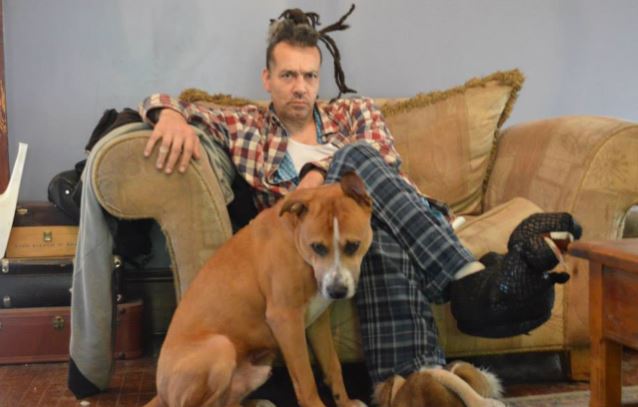 Former FAITH NO MORE singer Chuck Mosley has fallen on hard financial times and is asking for help from his fans so that he and his family can avoid being evicted from the house they have lived in for the past decade.

In a December 3 post on his Facebook page, Mosley writes: "Hey friends and other peoples, I am really dreading this. I have fought myself over this for more than a couple months. I seem to have no other choice than to lose my pride due to the lacking ability to provide a sense of security for my family.

"The shocking truth is that i'm not rich. We struggle every day, just like most everybody, more, right now, worse than ever, in a long time.

"Our landlord wants to sell the house we've lived in for ten years, and yes, we are behind in our rent, so he's using that as leverage to get us out so he can fix up and sell, right away, Technically, we're supposed to be out today, December 3rd, but he's deciding whether to give us another week. So here I am, for my family, on my knees, asking for help.

"I'm ashamed for being in this condition, that I have to burden others who look to me only to be my friend, and for me to be theirs, and I am abusing that relationship, and I apologize, but for my family I'll do anything... legal. And that's the reality.

"I could go into a dissertation about how and why, but the bottom line is we are broker than we've been in a good good long time, and can't bail out, so here I am asking that anybody who could afford to send a few dollars to my/our PayPal account ([email protected]) and for any substantial donations, we will offer up my better half's portrait of my dog, Fredo, and me, real scarface meets... me. She's an awesome artist, her name is Pip Logan, and there's a few more pieces of her work she's willing to part with for a few of the more generous donations. Just throwing that out there.

"Our band, VUA, has had to put off trying to tour or play any shows. We're starting to record new stuff, but even that is suffering at the hands of my family's financial situation, so, please, if you can, help. We will be eternally greatful and I will be eternally self loathing for having to be at this level.

"I'm sorry for asking. If i could do anything for you, please ask, and I swear I will do everything in my power to serve you, any way I can."

A few hours later, Mosley took to his Facebook page again to thank his fans for the response he received to his plea for help. He wrote: "We are overwhelmed by your support. I hate asking for help.

"We put the digital downloads of our albums 'Will Rap Over Hard Rock For Food' and 'Demosforsale' for 1$/donation at chuckmosley.bandcamp.com and we will be adding a few signed vinyl and CD copies soon. Big thanks to Matt Gladyszewski for taking extra photos for the demo release and to Cristian Saldías Sepúlveda for the graphic design help."

With Mosley at the helm, FAITH NO MORE became one of the '80s' leading underground bands on the strength of 1985's "We Care a Lot" and 1987's "Introduce Yourself". Despite exiting the group in 1988 under less-than-friendly circumstances, the Ohio-based Mosley is now friendly with most of his former FNM bandmates and has even joined them on stage in recent years.

Post by Chuck Mosley.
Find more on Faith no more