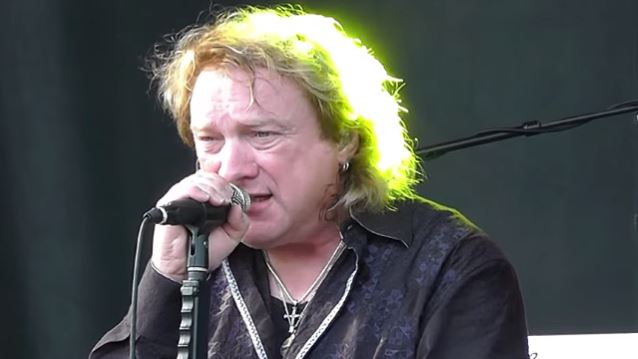 "The Five Count" radio show in Mankato, Minnesota recently conducted an interview with former FOREIGNER singer Lou Gramm. You can now listen to the chat in the YouTube clip below. A couple of excerpts follow (transcribed by BLABBERMOUTH.NET).

On his current relationship with FOREIGNER leader, guitarist Mick Jones:

"We are on good terms. We speak to each other on a regular basis. We patched up the friendship before that [Songwriters] Hall Of Fame show [in June 2013]. And it was the first time that we played together in over ten years. So the relationship is good, and I'm very pleased that it is, 'cause we've done so much together and spent so much time together. It would be a shame to go through the rest of your life on a bad relation, you know."

On whether it's hard to maintain his singing voice after all these years:

"Well, it's not incredibly tough. You just have to have common sense. Obviously, no drugs, no alcohol, and a lot of water. And keeping it limber by doing scales or singing songs to yourself. If you don't sing at all for two weeks, when you finally open your mouth, everything's tightened up in there. I draw a comparison to a baseball pitcher. You have to keep the arm limber, and if it gets tired, then you've gotta give it a little rest. But you can't rest it so much that when you use it again, it feels like you can't do the job."

On whether there are plans for him to release any new music:

"I have a bunch of songs, and what we're gonna do with 'em, we're not sure. But I'm hoping that there'll be an album, or at least an EP, by sometime early next year."

Mick Jones told The Pulse Of Radio that upon forming FOREIGNER in 1976, he knew that Lou Gramm would prove to be invaluable with a signature voice — with the songwriting chops to match. "I knew he had written, he was a writer too, and always felt that, y'know, it was important that the singer in any band had something to do with, [laughs] obviously, creating the songs, 'cause they're gonna sing them," he said. "Lou came up with some great titles; I think 'Head Games', I think 'Hot Blooded', too. And he developed into a really good writer."