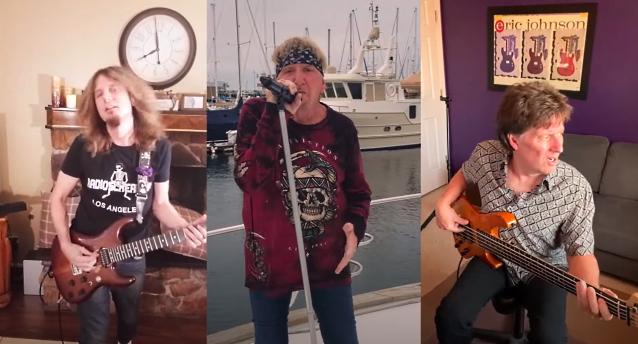 JACK RUSSELL'S GREAT WHITE singer Jack Russell and guitarist Robby Lochner have recorded a cover version of the STEPPENWOLF classic "Born To Be Wild". A quarantine-style music video for the track can be seen below.

Says Robby: "This incredible song was originally recorded by STEPPENWOLF and became famous in the movie 'Easy Rider'. Jack and I had a fun doing our own version of the song."

Joining Russell and Lochner for the recording were bassist Rick Travis and drummer Geoff Reed.

The clip was created by Jaymz Eberly of Eberly Productions.

JACK RUSSELL'S GREAT WHITE released an acoustic album, "Once Bitten Acoustic Bytes" on May 1 via Deadline Music, a division of Cleopatra Records, Inc..

"Once Bitten Acoustic Bytes" sees former Russell revisiting GREAT WHITE's 1987 multi-platinum masterpiece "Once Bitten" featuring some of their biggest and most recognizable hits, including "Save Your Love" and "Rock Me". Aided by the likes of Lochner (who also produced and mixed the album),longtime GREAT WHITE bassist Tony Montana (now on guitar),bassist Dan McNay and drummer Dicki Fliszer, these songs have been stripped to their emotional core, spotlighting the intensely passionate story at the heart of each song.