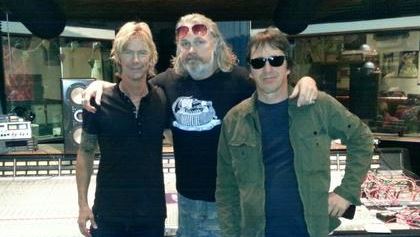 During a March 7 interview with Argentina's Vorterix, Duff McKagan was asked about his recent tweet in which he wrote that he spent "the first part" of his birthday "rocking" in the studio with his former GUNS N' ROSES bandmate Izzy Stradlin.

"[Izzy and I] recorded a song that day," Duff revealed. "We were talking on the phone, and [Izzy] said, 'Let's go record a song.' And we used Josh [Homme] from QUEENS OF THE STONE AGE's studio; it was open. So we just went it — Izzy and I and [ex-REVEREND HORTON HEAT drummer] Taz [Bentley] — and just had a blast. We recorded a song. I have it. It just got mixed. It's a super kick-ass song. And we just had fun, and we'll probably do it some more."

He continued: "We've always kind of done [stuff like that], but usually on his records. This was just like this open thing. And I had a riff, and he had an idea, and we recorded it in half a day."

Asked if fans can expect to hear the song on his next album, Duff responded: "Maybe. We're gonna maybe record some more. But we just enjoy making music together and enjoy each other's company. We're allowed to do that."

Both Izzy and GUNS N' ROSES lead singer Axl Rose skipped the induction, with Stradlin issuing a statement the week before the event, thanking his bandmates, the Hall Of Fame for "the acknowledgment of our works over the years," and the fans who "have supported GUNS N' ROSES from day one."