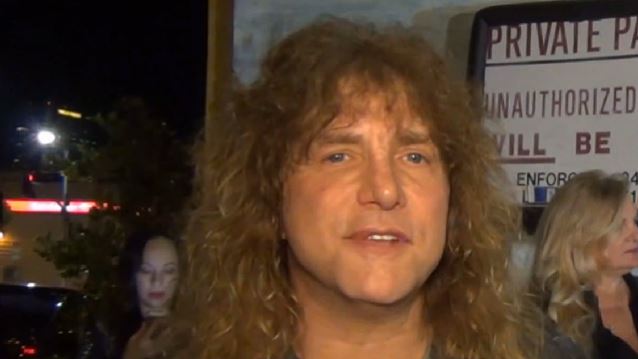 On October 26, Argentinean rock journalist Lucas H. Gordon conducted an interview with former GUNS N' ROSES drummer Steven Adler and Steven's wife Carolina on the red carpet at an evening of art with Billy Morrison and Joey Feldman benefiting the Rock Against MS foundation at Village Studios in Los Angeles, California. You can watch the chat below.

Asked what he has been up to in recent months, Adler said: "Right now I'm just taking care of myself. I've been having these problems with alcohol, and right now I'm just taking care of it. I have a nice program I'm working, and I'm looking forward to having one year [of sobriety]. Right now I've got nine months and eighteen days. And then next year I'm gonna start working and getting the band back together… I'm taking care of [my alcohol addiction] — cutting it off at the neck. I'm looking forward to going out and playing again. I have my record, 'Back From The Dead' [released under the ADLER band name], which I hope everybody will buy and listen to. And it's just been very exciting. Having a new life is exciting."

ADLER's debut album, "Back From The Dead", was released in North America on November 26, 2012 via New Ocean Media.

GUNS N' ROSES was inducted into the Rock And Roll Hall Of Fame in 2012. Adler, Slash and bassist Duff McKagan attended the ceremony, while Axl and founding guitarist Izzy Stradlin stayed home.