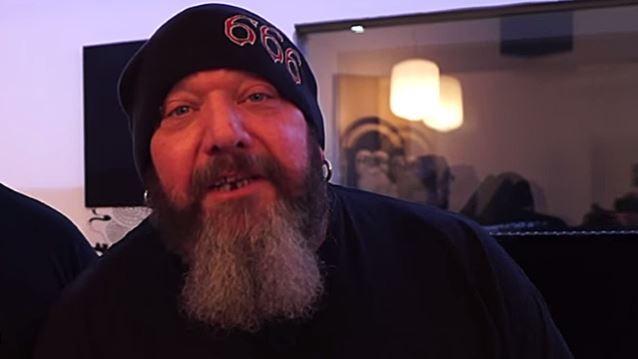 Paul Di'Anno says that he is recovering from an operation to remove a "rugby ball-sized abscess" on his lungs that turned out not to be cancer.

The former IRON MAIDEN frontman tells Classic Rock magazine that he expects to be in care for up to eight weeks and says that he could have to wait six months for an urgent knee replacement operation.

Rumors about Di'Anno's health status spread like wildfire yesterday after his friend and fellow former MAIDEN singer Blaze Bayley told Chile's HumoNegro web site last Friday that Paul was battling cancer. But Di'Anno insists that is not the case.

Di'Anno tells Classic Rock: "I collapsed at home after coming back from Argentina and a scan found a massive big black shadow on my lungs. I thought I was on my way out, but it turned out to be non-malignant.

"It was an abscess that was all infected and the size of a rugby ball. It turns out I've been living with this thing in me for the last few years.

"The doctors said it was an airborne thing that caused the infection and I could have picked it up anywhere.

"I had to go into recovery after the operation and rather than go back to my home in Sao Paulo, Brazil, I stayed here in England and I'm now in a care home."

Di'Anno claims Bayley's interview is based on information that Blaze had earlier in the year when Di'Anno feared he might have cancer.

The 58-year-old singer said that his left knee still needs to be replaced but that he has to wait until he is free of the infection associated with the abscess.

"I'm getting a lot of physiotherapy on my left knee, so that they can try get me back on my walking sticks again," he says. "I've already had the other knee replaced and once this one is done I will be fine.

"It's very, very painful right now and I have been quite depressed. I'm on 30 pills a day and in a wheelchair. But everyone says I'm looking better. I'm trying to stay positive.

"I suppose I'm pretty damn lucky, but the last six months have been hard."