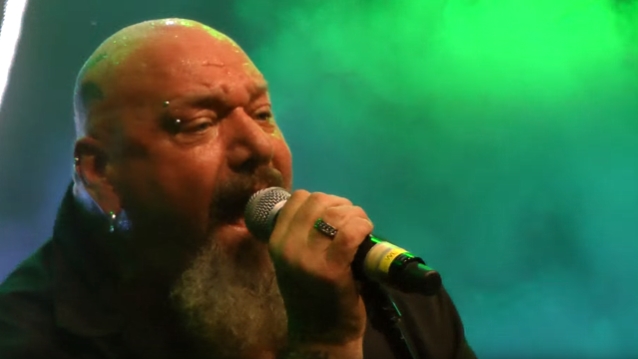 Former IRON MAIDEN singer Paul Di'Anno says that he is going through "hell" waiting for a knee-replacement operation.

Di'Anno has battled a number of health issues in recent years. He reportedly underwent an operation in 2016 to remove a "rugby ball-sized abscess" on his lungs and required a knee-replacement operation on both knees after getting involved in several motorcycle accidents over the years. As a result, Di'Anno was forced to sit down while performing at his most recent shows.

Earlier today, Di'Anno responded to an interview request from Jimmy Kay from The Metal Voice, writing: "Hi mate I'm going Hell at the moment waiting on surgeries my leg keeps ulcerating so they can't put in the Bionic knee yet it's very depressing ? I'm doing my best to stay up but it's hard I have more down days than good ? But if folks as I'm ok just at home with my crows and writing new stuff for later . Not really up for interviews at this time as got a lot of clinic visits and trying to focus on this ! But thank you maybe soon ? Enjoy your vacation"

Paul Dianno news update- A lot of folks asking me what's up with Paul, just spoke with him here it is . Be well brother...