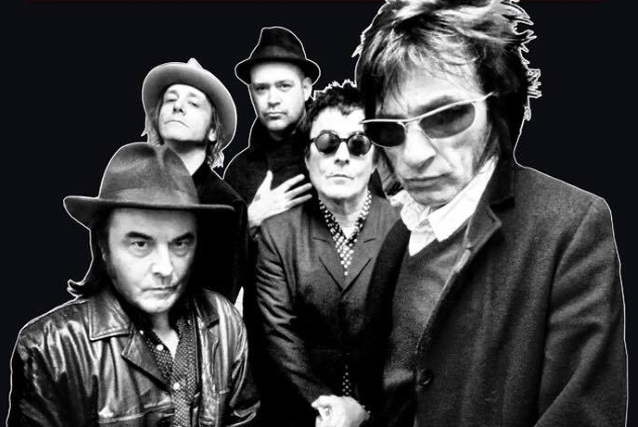 THE BRUTALISTS are a Los Angeles-based transatlantic rock group which is inspired by the concrete architecture called Brutalism that came into vogue at the point where economy superseded beauty as the chief factor in urban design, and where function superseded form. The band use brutalism as a metaphor for the artistic underdog. The fascinating history of Brutalist architecture represents a contemporary example of visionaries ignoring their critics and prevailing in the end.

THE BRUTALISTS are led by founding L.A. GUNS member Mick Cripps and LONDON QUIREBOYS founder Nigel Mogg, industry veterans and old bandmates, having played together in the London band KILLER ELITE in the mid-1980s. L.A. GUNS and THE QUIREBOYS also toured together in the U.S. in 1989. The group is rounded out by Robert Cripps, Kent Holmes and Charlie Nice.

THE BRUTALISTS' music is a mix of their influences — the dirty, leering blues of pub rock and R&B, the urgency of street punk and the synthesized dance ennui of post-punk, seasoned with bits of mod, reggae and whatever else got stuck in the filter before the air system went down. They were the children who played in the concrete yards under the acid rain in the shadows of the nuclear cooling towers, with the ever present fear of atomic annihilation. They were told they had no future, yet here they are, all grown up and living in the pre-apocalyptic garbagescape.

THE BRUTALISTS are signed to Cleopatra Records and their debut album will be released in August 2018. The effort will be made available on vinyl with a limited-edition silk screened cover design, as well as CD and will also be released on all streaming platforms.

THE BRUTALISTS continue their West Coast tour dates through the summer and into the fall. A U.K. tour has been booked for mid-October, with five dates, all support slots, opening for the U.K. band THE DIRTY STRANGERS.