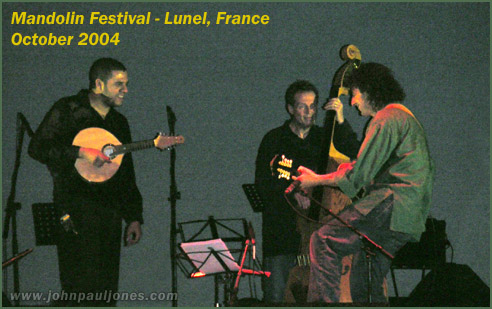 "I have now started to write and record for the new album. I'm sort of doing both things at the same time, a new approach that I am hoping will make for a more organic process.

"I took some time out last week to attend a Mandolin festival in Lunel in the south of France [photo]. I went on the invitation of Mike Marshall, who I met at Merlefest and again at the Mandolin Symposium. He was there playing with a fantastic Brazilian mandolinist by the name of Hamilton de Holanda, who is the top exponent of a style of music called Choro (pronounced 'shorro'). Choro is the forerunner of Samba, and is both a melodic, harmonic and rhythmically complex form of music. Mike and Hamilton did solo spots and then the two played together. I can't tell you how exciting, both musically and visually it was watching these two brilliant players spark off one another. The music was both passionate and soulful as well as being technically dazzling, I felt privileged to be there. They were also two extremely nice guys, in fact they persuaded me to join them on stage for one (funky, but slower!) number, that I played on a borrowed double bass. Lunel is now witness to my first ever double bass solo...

"So, all of my instruments have been restrung, no small matter, and I am writing / playing / practising / listening / singing / recording / walking, anything and everything necessary to get the music flowing!"