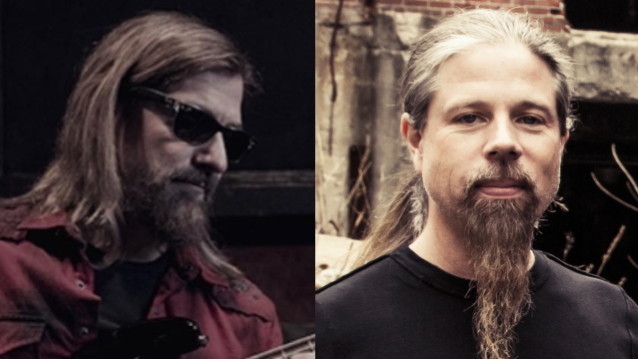 Former MEGADETH and BLACK LABEL SOCIETY bassist James LoMenzo has announced the formation of a new project with Chris Adler.

LoMenzo broke the news of his collaboration with the ex-LAMB OF GOD drummer during an interview with "The Blairing Out With Eric Blair Show" at last month's NAMM show in Anaheim, California.

James said (see video below): "I'm making some music with [Chris] right now and a couple of other really talented fellows. And we're actually putting together music as we speak. And it's more metal-oriented, which I didn't dip my fingers in that for a couple of years. So that's exciting."

Asked what it is like playing with Adler, Lomenzo said: "He's an extraordinary drummer. Not only is he a modern metal drummer in that he has speed and he has accuracy and, obviously, energy, but he's got a lot of soul, too, in his playing. He's able to kind of pull back on the beats in a way that some other drummers these days don't even consider. He's got a wide variety of music that he likes. And he's a wonderful guy. I first met him when I was in MEGADETH on the Gigantour, and he was a swell guy. And my jaw hit the floor when I saw [LAMB OF GOD] play and saw his drumming. So I was really delighted to get to know him this year and play music with him."

Regarding how his project with Adler came together, LoMenzo said: "Chris and I got off tour [with HAIL!], of doing this overseas thing [last October], and he called me up and he asked me for some numbers of musicians. I said, 'What do you wanna do?' He goes, 'Well, I'm doing some music, so I thought I'd try a few things.' And I said, 'Well, don't forget I play bass.' And he was, 'Oh, I didn't wanna ask you. But, of course.' And so he started sending me some tunes. This fellow Pat plays guitar. Another fellow he ran into in India, a guy named Girish [Pradhan] — an amazing singer. He's just been tripping over these things. So I think his path is kind of putting this all together. We've been demoing music together, and we're just seeing what it is."

James also spoke about the new project's musical direction, saying: "What I think it is right now, I think it's a perfect blend of modern music and classic metal music, which I think is just based on the elements that are put into it. So I'm really excited about it. I think it's really exciting music. I think it's accessible music. A lot of older metal fans and younger metal fans will be able to grab on to both parts of it. And so we're gonna see if we wanna take it any further right now. We're still just making music and seeing how it sounds."

Asked about the "vocal sound" of the new project, LoMenzo said: "I can tell you straight away, this singer can sing like Paul Rodgers or like Ronnie James Dio or like JUDAS PRIEST. Chris, he was doing a clinic, and they set him up with these guys to play with. He immediately, like a little kid, he didn't call me, but he texted me to keep it on the low, and he goes, 'I found this singer who's just amazing.' And he sent me some stuff that the guy was doing. And I was going, 'Yes!' And then he sent me a photo, and I go, 'My God! He doesn't even look horrible or anything.' That still matters, folks. So, anyway, we have all that together. Let's see if anything happens. You never know. But, musically, I'm very thrilled about it, and I know Chris and the other guys are as well."

LAMB OF GOD officially parted ways with Chris last July. His replacement is Art Cruz, who has previously played with PRONG and WINDS OF PLAGUE, and filled in for Adler on several LAMB OF GOD tours in 2018 and 2019.