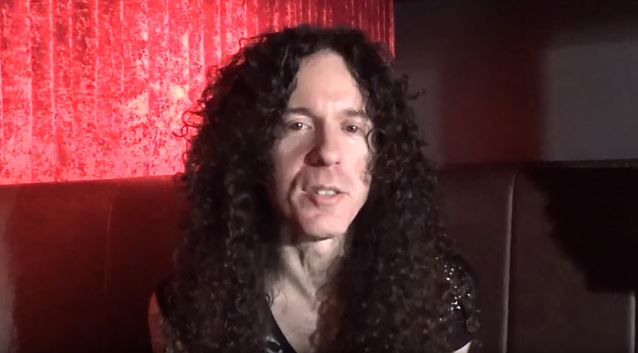 Former MEGADETH guitarist Marty Friedman is one of seven people who were named Japan Heritage ambassadors to spur visits to regional cities ahead of the 2020 Tokyo Olympics and Paralympics.

The ambassadors will promote history, culture and sites in regions registered by the agency as Japan Heritage through blogging and TV appearances.

A photo of Friedman at today's (Friday, November 4) press conference in Tokyo — where his ambassadorship was announced — can be seen below.

In July 1999, Friedman was onstage performing at Woodstock '99 in front of a sea of fans as the lead guitarist for MEGADETH. Since joining the band in 1990, Marty played a crucial role in their rise to stardom with his unorthodox style of virtuoso guitar playing, selling millions of records worldwide, and being nominated for multiple Grammy Awards. Just six months after Woodstock, in an unexpected move that shocked his friends, family, and especially his bandmates, despite platinum albums and sold-out tours, for reasons unknown, he suddenly quit the band and walked away from it all. Unbeknownst to his U.S. fans, Marty moved to Tokyo to pursue his love of Japanese pop music, and in the process, reinvented himself as a wildly successful Japanese TV celebrity! Marty has appeared on 700-plus television programs, commercials and motion pictures since then, and become was dubbed "the Ryan Seacrest of Japan" by Billboard magazine in the USA.

Friedman in 2014 spoke to Wondering Sound about his decision to leave MEGADETH in order to make the kind of music that he was passionate about: Japanese pop music, or J-Pop, which Friedman calls "embarrassingly happy."

"I found myself touring with MEGADETH, and in my hotel room I'd be blasting this Japanese music all the time. What's wrong with this picture?" he said.

Today, I was inaugurated by the Japanese Government Agency of Cultural Affairs as an Ambassador of Japan Heritage. I`m...