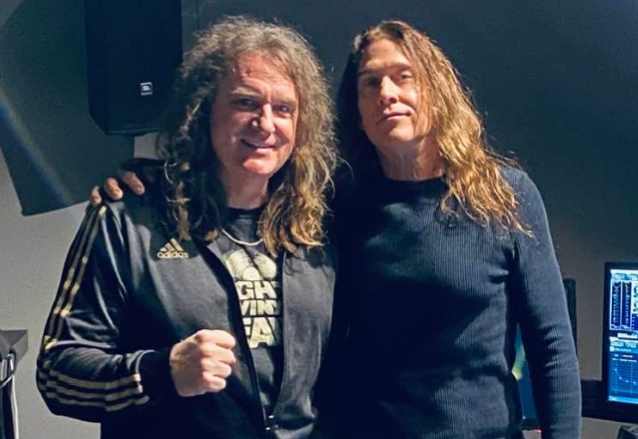 In a new interview with The Neurotic Guitarist conducted at last weekend's NAMM convention in Anaheim, California, former MEGADETH bassist David Ellefson spoke about his renewed collaboration with his ex-MEGADETH bandmate Jeff Young. He said (as transcribed by BLABBERMOUTH.NET): "I've been listening to what the fans have been requesting. He and I have actually been working on a couple of new songs."

Regarding how the musical reunion between Ellefson and Young came together, David said: "When we started filming the Nick Menza documentary, which was back in January, we all came to L.A. and filmed. And we were sitting at the Rainbow [in West Hollywood] one night having dinner, and Jeff goes, 'Remember those couple of riffs that I had that were from the 'So Far, So Good... So What!' tour that were gonna be hoped for to be what would become 'Rust In Peace'?' And then he was out of the group by then. And as he hummed them to me, I go, 'Dude, I totally remember those riffs. I totally remember 'em.' And they're kind of complex, kind of music nerdish but cool and heavy. And I go, 'Oh my God. We've gotta get in a frickin' room and work on these.' So Mike Heller [FEAR FACTORY and RAVEN drummer], who's a great producer as well as a drummer, we have put some tracks down. We've written songs. Now we just have to get them recorded."

David also addressed the fact that he, Young and another former MEGADETH guitarist, Chris Poland, will perform "a very special set of thrash classics" at the fall 2022 edition of the Days Of The Dead horror and pop culture convention, set to take place November 18-20 at Crowne Plaza O'Hare in Rosemont, Illinois. The "Days Of The Deth" performance on Saturday, November 19 will be open to anyone with a Days Of The Dead ticket. V.I.P. pass holders will have early entrance to the event.

Asked if there are any "legalities" standing in the way of Ellefson and Young performing MEGADETH classics without the band's leader Dave Mustaine, David said: "No, there isn't. Because as long as you don't use someone's logo or their trademark, you're fine."

In 2004, Ellefson filed an $18.5-million lawsuit against Mustaine, alleging the MEGADETH leader shortchanged him on profits and backed out of a deal to turn Megadeth Inc. over to him when the band broke up in 2002. The lawsuit was eventually dismissed and Ellefson rejoined MEGADETH in 2010.

DAYS OF THE DEAD is thrilled to announce our friends in HARDWIRED: A TRIBUTE TO METALLICA will be joining us in Chicago,...