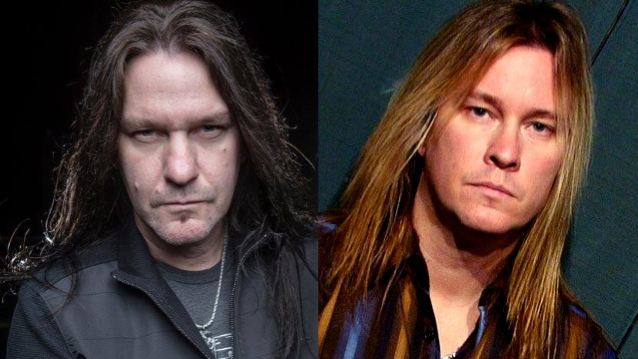 In a new interview with the "Nothing Shocking" podcast, Shawn stated about the new project: "We started working on some music probably a couple of months ago now. It's been a couple of months. We've been talking about doing something. Glen owns his own studio up in Canada, so why not utilize the fact that we don't have to go and pay huge studio costs and et cetera, et cetera, and get some friends together that we admire and that we respect and work on a record. And that's exactly what we're doing.

"We have Glen and myself, of course, and we have a bass player named Joe DiBiase, who was in a band called FATES WARNING out of Connecticut for years and years and years," he continued. "A great player; a friend of ours. So he's gonna play bass on it. And we have a singer from Germany who was in a band called METALIUM for a number of years, and his name is Henning Basse, who is a fantastic melodic singer. So that's what we're doing currently.

"It's a slow process, because life gets in the way," Shawn added. "We all have things that we deal with, so we do that. But when we have the time, we work on it, and so far it's turning out to be really exciting. We're pretty happy with the material we've done so far."

Asked how the new band is different and similar to his previous collaborations with Glen, Shawn said: "It's been really similar to the first band that Glen and I did years ago, which was a band called EIDOLON. We released, actually, five records on Metal Blade in the early 2000s, right before we both got into MEGADETH. And the dynamic of that was that I write most of the material. Although Glen does contribute to some of it, I usually have the main germ of ideas, and, of course, he records all that stuff. So he's kind of a studio guy. He's the guitar player, but he handles all of the studio recording affairs, and I just kind of take on the job of creating most of the music. And we finetune it — he tweaks it and kind of makes it his own in a way. But that's kind of the working relationship we have with that. Because if Glen wrote all the music, I'd basically be doing nothing, and he would have to tackle all the work on his own. So we made a decision years ago — that was back in the mid-'90s, actually, when we put out our first bit of music, before we got signed to Metal Blade — that's always been the working dynamic, is I create most of the material, and he handles all the recording affairs with that. And it's worked out quite well. So that's what we're doing this time as well. At this point, we're on song four. I think we're gonna do eight or nine songs, and so far I've written all of them. It's just kind of how it worked out."

"It's certainly in limbo," Drover said. "Chris joined IN FLAMES a couple of years back, which is a great gig for him. They're great guys, a great band, and he fits with those guys like a glove. So he's quite happy and content to be doing that. With that said, he was so busy — he basically was gone for pretty much a year touring in support of their latest record they put out — and now with what happened in March of last year," referring to the coronavirus pandemic, "everything came to a screeching halt.

"Honestly, I don't know what the [other] guys are doing," he continued. "I talk to Henry and Matt a little bit here and there, but it's more just, like, 'How are you? I hope you're doing well.' We really don't talk about music a whole lot; none of us do. But we're all still friendly. Actually, Henry has released a couple of things — different kinds of music — on his own, which makes him happy, so more power to him. For me, I wanted to do something with my brother again and create some new music. And, like I said before, with the situation we are in, why not utilize that and create some music. So that's what we're doing."

Glen Drover left MEGADETH at the end of 2007 and was replaced by Broderick, who previously played with NEVERMORE and JAG PANZER.