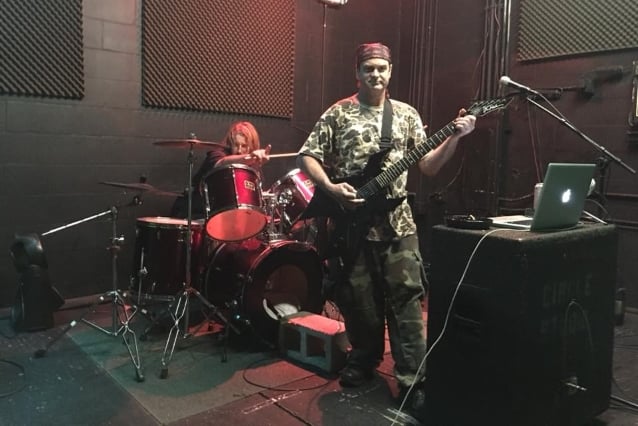 Brunelle stated about MOSAIC COVENANT's music: "It is Alien Metal!!! Do you believe in Aliens? What if Aliens are really GOD? The MOSAIC COVENANT (named after Moses),also known as the Sinaitic Covenant (named after the biblical Mount Sinai),refers to a biblical covenant between God and the biblical Israelites, including their proselytes aka The 10 Commandments.

"I feel this music I am releasing was given to me by Aliens what I believe to be the true God. It is the beginning of what is hoped to be much more to come of them making their presence known. It is not me creating this music it is them. By all means do not take this as some Christian religious expression. This is to open the eyes of humanity to the existence of Aliens.

Brunelle was in MORBID ANGEL from 1985 until 1992 and he appeared on the band's first two albums, 1989's "Altars of Madness" and 1991's "Blessed Are The Sick". He returned to the group a couple of times — most notably in 1994 and 1998 — to help out with live work, but he never took part in any additional recording sessions with the band.

Brunelle formed PATHS OF POSSESSION in 1999 with Randy Butman (SILHAVEN),Jay Fossen and Erin "Goat" Fuller (CRYPTIC WINDS) and appeared on the group's independently released CD-R demo "Legacy In Ashes" in 2000.

Brunelle has been largely inactive for the past decade and a half, having spent much of that time battling drug addiction, which has apparently landed him in jail nearly a dozen times.

A few years ago, Brunellestated about his exit from MORBID ANGEL: "I was unable to stay with MORBID ANGEL for personal reasons. I spent the next few years trying to start a band and PATHS OF POSSESSION was born. But as fate would have it I quit the band just before they were signed to Metal Blade Records. After I left PATHS OF POSSESSION, there were many dark days for me. It has taken every ounce of strength I have to crawl out of the darkness."