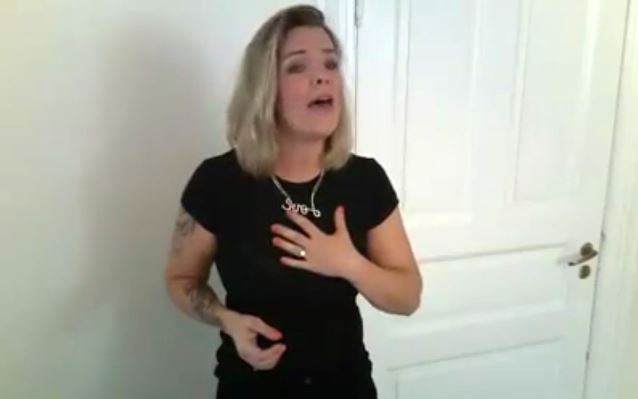 A video clip of former NIGHTWISH singer Anette Olzon performing an a cappella version of the band's song "For The Heart I Once Had" from the 2007 album "Dark Passion Play" can be seen below.

Anette's debut solo album, "Shine", was released in March via earMUSIC, the Hamburg, Germany-based international rock label which is part of Edel Group.

Olzon previously stated about her solo CD: "The album is very personal with songs I have started writing already in 2009 but also very recent songs.

"The overall message of the album is that life can be really dark and filled with hardship and sadness, but you can always choose to see some light coming through, to make you stronger and full of life — making you shine… no matter what."

In a recent interview with Metal Blast, Olzon stated about how she has been portrayed since her departure from NIGHTWISH: "It was really hard for me. You can always say 'no comment' and say nothing about what happened, or you can open your mouth, as I have done. It was really hard for me to decide if I should say something or if I should keep quiet. But I felt that in order for me to move on, I needed to tell my story. I also knew that there would be a lot of hate and negativity directed toward me; I can feel that many people do hate me because I have told people my truth. At first people were a bit more negative, but since then it has been less and less of that. I hope that now it can become more about me and 'Shine'. I know there's some negative PR, but people who know me would say it's a big laugh, me being called a diva. I just hope that all the negativity will fade away quite soon so we can all move on."