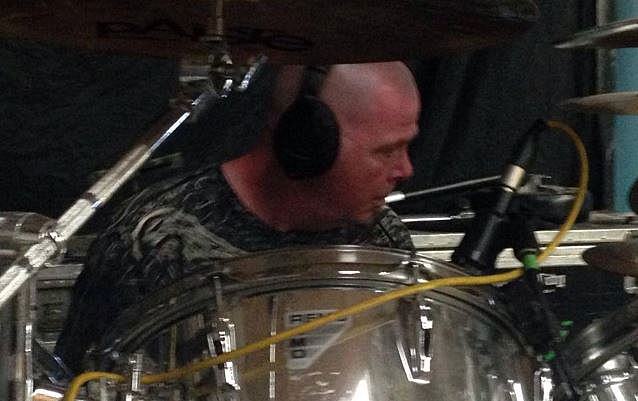 INFECTUS 13, the new "power groove metal" band featuring former OVERKILL and BATTLEZONE drummer Sid Falck, has released its first original song, titled "Enemy At The Gate". The track will be made available as a free download for 48 hours starting Monday, March 9. It will be free on one specific outlet starting that day through Tuesday, March 10. After the initial 48 hours, it will be available for $0.99 on just about every known online music outlet.

In a 2014 interview with Germany's Crossfire webzine, Falck stated about the formation of INFECTUS 13: "Well, as it is probably known by now, I was diagnosed with heart problems about one and a half years ago. Up until that point, returning to playing was not really something I thought about much. It was always, 'I can always do that later if I feel the urge.' Well, after having two heart surgeries last year, which didn't fix the problem, I kind of had to face reality, that I might not have time to do it later. So after thinking about it for a while, I came to the conclusion that if I was going to try doing something again, I better hurry up and do it while I can."

He continued: "As far as partners: On vocals and general mayhem, I have Mr. Bob Barnak of SPEED\KILL/HATE fame helping me out. He is absolutely brilliant! Honestly, the chance to work/record with him was the driving force behind me deciding to give it a go. On guitar, I have Janna Jordan-Squires. She was previously part of a band called DOWN FOR FIVE. All I can really say about Janna is that she is probably one of the most talented musicians I have ever had a chance to work with. She blows me away every time she plug in her guitar."

Regarding INFECTUS 13's musical direction, Falck said: "I am not sure how to describe our sound. The writing process is pretty traditional. At the moment, we are all writing songs, song ideas, Song parts and such. And with the technology of today, instead of spending hours in the studio trying to show each other what we are coming up with, we can instantaneously exchange ideas via the Internet / cloud. That way, when we get together in the studio to go over the ideas, we already know what parts are written, which parts should be changed, and what parts still need to be finished. I am not going to tell you that I am thrilled with the 'new' way of doing things, but I will admit it does beat the old way of sending cassette tapes across the country through FedEx."

Asked if he still had contact with any of OVERKILL's current and former members, Falck said: "I do and I have. I know that there are a lot of stories going around about some kind of hatred between me and the band and Bobby 'Blitz' [vocals] and I especially. I have heard them all. But that’s not the case at all. We didn't have much contact for a number of years, but I visited with them on both the 'Immortalis' and 'Iron Bound' tours, and fully expect visiting with them on the upcoming tour, if at all possible. I won’t go into too many details, but I can tell you that both Dave Linsk [gitar] and Blitz have checked in on me during all my heart problems. Blitz would text me every couple of days while I was in the hospital and we continue to be in touch on a fairly regular basis. That is priceless and very special to me. I have nothing but respect and admiration for Blitz, D.D. [Verni, bass], as well as Dave, Derek [Tailer, guitar] and Ron [Lipnicki, drums]. The fact that they are still doing their thing year after year, refusing to back off, while everyone else went on 'hiatus' deserves nothing but respect and speaks volumes about their dedication, not only to their brand, but to their fans."