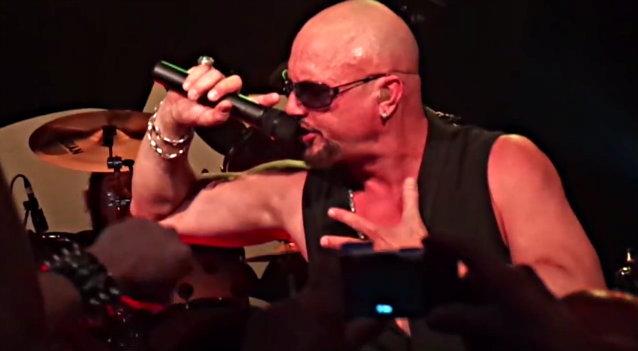 On opening day of the baseball season in 2011, San Francisco Giants fan Bryan Stow was beaten in the parking lot of Dodger Stadium by two individuals, who are currently serving a sentence for their actions. Stow, a proud father of two and a paramedic, sustained severe injuries to his brain and was placed into a medically induced coma after the incident. It would be months before he would go outside and, ultimately, more than two years before he would go home.

Shortly after the occurrance, while Stow was in the hospital, QUEENSRŸCHE became aware that he was one of their biggest fans, sporting a sizeable tattoo of the QUEENSRŸCHE logo on his left arm. At the request of a friend, the band made a surprise visit to Bryan in the hospital that September, which ended up being an experience that both will never forget.

With a week remaining in their "Farewell" tour, Geoff's version of QUEENSRŸCHE (which will continue on as OPERATION: MINDCRIME after the tour ends) will be auctioning off the QUEENSRŸCHE stage backdrop that has been featured on several tours. "It's truly a special part of our musical history and we'd like to raise some much-needed funds for Bryan so he can continue his progress," says Tate.

The auction will begin at 3 P.M. PDT on Sunday, August 31, the day after the very last performance of "Queensrÿche Starring Geoff Tate - The Farewell Tour", and will end at 3 p.m. PDT the following Sunday, September 7.

"We're honored and thankful to have fans like Bryan in our life and would like to present him with a check just prior to Thanksgiving," says Tate. "Every little bit helps at this point and we hope to continue our efforts for Bryan and his family down the road."

In addition to the money raised from the auction of the backdrop, Geoff will personally be donating his proceeds from a song titled "Facing My Demons" that he sings with THE VOODOOS, who are currently out on tour with him. The track can be downloaded here.

Earlier this month, Bryan came out for the "Queensrÿche Starring Geoff Tate" performance in Morgan Hill, California and, more recently, made a clubhouse visit with his son to the San Francisco Giants clubhouse on Sunday, August 17, where he was guided by longtime third base coach Tim Flannery and Giants relief pitcher Jeremy Affeldt. Flannery, a musician himself, has performed a series of Northern California concerts over the past three years to raise money for Bryan, and plans to continue his efforts as well.