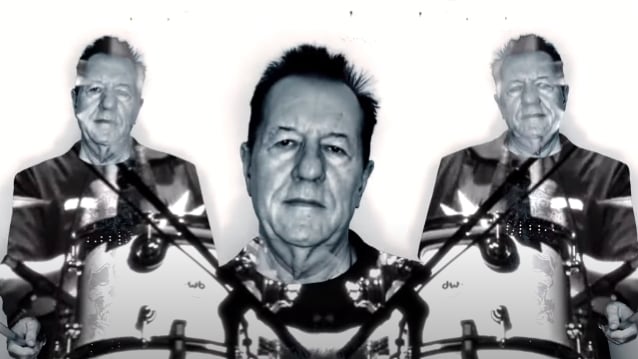 Former SCORPIONS drummer Herman Rarebell has announced his latest musical collaboration, THE SEEING TREE, a rock art collective committed to using music as a force for connection, awakening and positive change in an uncertain world.

THE SEEING TREE recognizes that the medium is the message, and in a post-truth and divisive world, positive messages and calls for change need to be heard and, most importantly, released by music artists. It's not enough to watch from the sidelines; it's important to state the case for unity and empowering change.

In addition to Rarebell, THE SEEING TREE features producer and composer Lee Pepper and performance artist, singer and lyricist Eugenie Arrowsmith — three creatives drawn together with the intention to release music that expresses passion and awareness. Music that confronts the need for global peace, ecological change and calls all good people to stand together globally. Each member of this musical collective brings a different set of skills to the table but they all recognise that we are at a very specific point in human evolution looking headlong at a tipping point.

The official music video for THE SEEING TREE's debut single, "I Can See The Signs", can be seen below. The clip was shot during lockdown in Herman's garden in Germany and in the Sussex Garden of Pepper and Eugenie.

Rarebell met Pepper at the "Drum Legends" show that he curated at The Brighton Dome in 2019 when Pepper was drafted in to record the show. The pair immediately hit it off and started talking about music and exchanging ideas. In the process, Pepper introduced Herman to Arrowsmith (who had previously been signed to Virgin 10) and they began exchanging backing tracks and ideas. THE SEEING TREE was born out of these creative exchanges.

In an interview with Classic Rock Revisited, Rarebell stated about the huge commercial success of SCORPIONS' 1982 album "Blackout": "Mercury Records was totally behind us and they believed in us. They wanted us to keep making albums. They wanted us to grow and do better each time out. 'Lovedrive' went gold. 'Animal Magnetism' went gold and then 'Blackout' was the first one to go platinum. [Rudolf] Schenker / [Klaus] Meine / Rarebell was a great songwriting team. You can see that from how many successful albums we had. After I left the band, they didn't have any more hits."