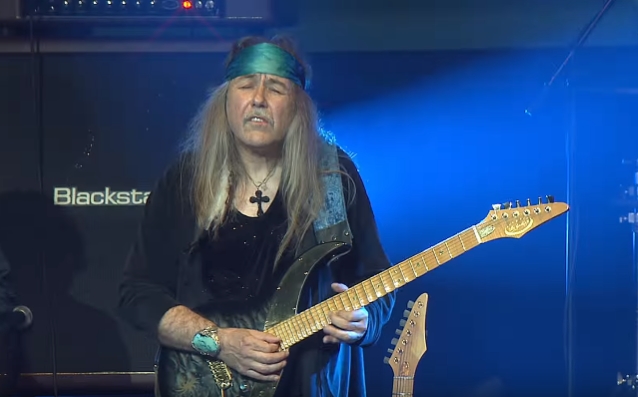 Roth — who was in the SCORPIONS for five years before leaving the group in 1978, following the release of the live double album "Tokyo Tapes" — and Schenker will be joined on select songs by drummer Rudy Lenners, who played on SCORPIONS' "In Trance" and "Virgin Killer" LPs.

A statement on Uli's Facebook page reads: "We are very pleased to announce that Rudolf Schenker will join Uil Jon Roth as his very special guest in Tokyo [on January 21] and Nagoya [on January 22] for his 50th Anniversary shows.

"This will be a truly emotional reunion, because Rudolf and Uli have not played Tokyo Sun Plaza Hall together since their legendary 'Tokyo Tapes' shows in 1978.

"As a further special treat, Rudy Lenners — the original drummer of the 'In Trance' and 'Virgin Killer' albums — will join Uli and Rudolf for some songs. Please, don't miss that historic event!"

Uli's 50th-anniversary tour will resume with two shows in Germany next week before the guitarist jets off to Japan.

The North American leg of the trek will kick off on March 20 at Whisky A Go Go in Los Angeles and run through May.

In a 2015 interview with Noisey, Rudolf stated about the Uli Jon Roth era of the SCORPIONS: "With Uli Jon Roth, he was more of a Jimi Hendrix fan, and we had two different styles — the Klaus Meine-Rudolf Schenker sound, and the Uli Jon Roth sort of Jimi Hendrix kind of sound. And later on, when Uli left the band, we really found our style."

Former SCORPIONS drummer Herman Rarebell concurred, telling Classic Rock Revisited: "The direction [Uli] wanted to go when I joined the band was more of Jimi Hendrix style music with an orchestra. When I joined, I told Rudolf that we should become a melodic hard rock band who writes songs that people can sing along with. Uli wanted to do his own thing and he formed ELECTRIC SUN."

We are very pleased to announce that RUDOLF SCHENKER will join ULI JON ROTH as his very special guest in Tokyo and...