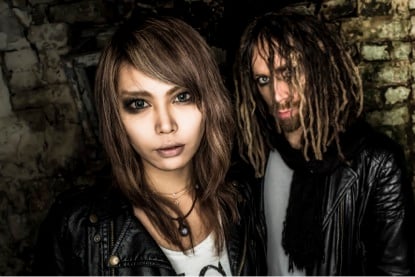 Mikee Goodman of SIKTH and PRIMAL ROCK REBELLION fame has revealed details of his new band, OUTPATIENTS. The lineup will feature Yuuri on vocals, Mikee W. Goodman on vocals, Kieron Pepper on bass/keys/samples, Charley Olsen on guitar and Will Romain on drums.

Mikee describes how the collaboration came about: "I went to Tokyo last year in a search for something new to inspire my mind. Finding Yuuri opened up many more possibilities. Her versatile style and unique melodic voice works so well with my own."

He continued: "I phoned Kieron from Japan and he sent over beats to match our ideas.

"It's heavy, got electronic elements and really tough grooves, but also contains epic, dark melodies. I am singing in a very aggressive style on most songs, which I like doing.

"This band feels as if it has gone somewhere very different.

"We are so excited about playing these songs live!”

The band's first music video, for the song "Throw Rocks", can be seen below.

"The 'Throw Rocks' music video was mainly recorded on one cold day in December 2012," explains Mikee.

"Will, our drummer found this barn. It was falling apart, in total decay. A tree was growing through the bricks, and we even had debris falling on us throughout the shoot… But this was perfect for what we wanted, where we felt we should be, for the vibe of the song. After filming there, I edited and kept on adding new layers.

"The song and the visuals really complement each other. I am really proud of it. We all are.

"I actually think SIKTH fans would be into this band too, 'cause of the dual vocals and frantic nature, but this is very much out there on its own, in terms of style and sound."