Former SKID ROW and SAIGON KICK drummer Phil Varone is working on an autobiographical movie and accompanying soundtrack called "30 Yrs A Drummer". Originally scheduled for release in March 2020, it is now due in October.

Earlier today, Varone wrote on social media: "30 yrs a drummer NEW release date... I'm excited to announce the new release date for 30 yrs a drummer documentary and Trident Records soundtrack is October 15th. Along with being the release date, October 15th is my birthday as well, so it will truly be a great day to celebrate. A special thanks to all that have supported the documentary, for your patience and continued support. Check out the brand new trailer!!!"

"30 Yrs A Drummer"'s official synopsis is as follows: "What do you want to be when you grow up? '30 Yrs A Drummer' is a feature-length film that documents the life and career of professional drummer Phil Varone. A career that has spanned over some three decades, until Phil's abrupt decision to hang up his drumsticks. What would make Phil retire from something he loved so dearly? This all-access look into the music business, rock stardom, and life as seen through Phil's eyes will answer that question and so much more.

The 52-year-old rocker made his decision official to retire from drumming via a social media post back in March 2019.

Varone told WRIF's Meltdown that he had been "thinking about" calling it quits with his drumming career "for a while. But because I did this record [RED DRAGON CARTEL's sophomore album, 'Patina'], I really wanted to tour the record. 'Cause I really, truly love this record, and it's my best drumming in my career. And working with Jake has been one of the greatest experiences, and I'm honored and grateful to work with a genius like him.

"I did a short couple of days with BULLETBOYS, which, that I did quit after two days, because the singer is the worst human on earth and just a pathetic sack of garbage," he continued. "It was a joke. The band draws 20 people and he screams and pisses and moans and tells everybody that he sold millions of records… So that kind of put the bad taste in my mouth. I'm, like, 'Is this what it's gonna be? A washed-up joke yelling every night, because only 20 people come, 'cause no one cares about him anymore?' And Jake wasn't like that. Jake is a professional. Jake is a true musician and a great, great human, unlike Marq [Torien]. So it was two different things.

"When I did the BULLETBOYS thing and I was driving home from it and I had my best friend in the car, I was, like, 'You know what? I don't know if I'm cut out for this,'" Varone added. "When I was 25, it was one thing. But I'm a [52]-year-old man. I have grown children that I wanna enjoy. I don't wanna do this. But because it was Jake and it was that record, I wanted to at least play. And the tour that was booked was short — it was five, six weeks; whatever it is — and I thought that would be a good amount of time to gauge if I really wanted to. And the minute we started rehearsing, things hurt. Drums are hard. We joke about it, but Neil Peart [RUSH] just retired, because he said, 'If I can't play to the caliber that I played when I was younger, I don't wanna play drums.' And that's how I kind of feel. 'Cause everything hurts. The tour is brutal. We happened to pick winter, which is the worst time to tour. Luckily, we have a tour bus, and the band is incredible. Between the band, this is the most fun I'm having. These guys are really great guys. We're having fun on the bus. There's no tension and weirdness. But it's all kind of wearing us out, 'cause we're older guys. Anthony [Esposito, bass] is from LYNCH MOB and Ace Frehley, and me with SAIGON KICK and SKID ROW, and, of course, Jake with Ozzy [Osbourne] — we're older guys. So it wears me out. And I have to say that I'm in pain. So when it comes down to drums, it's not that I hate drums — it's just that right now, it equates me with hurting and hassle. And I don't have the passion that I used to when I was a kid — I don't. 'Cause I've done it all already — I've done everything that I needed to do with drumming and music, and I'm pretty content."

Despite the fact that he is retiring from drumming, Phil said that he wanted people to understand that he was "leaving happy. I'm not angry," he said. "I'm truly leaving on my own terms and very happy and excited to the next level, which is writing. My words are everything. So, some of the fans are a little upset, which I understand, but it's 30 years — I've given you 30 years, with a catalog of music that I'm so very proud of and grateful to have been a part of. And now I'm gonna write. And I'm gonna give you something even more valuable, which is my words and very personal thoughts, and I'm hoping that people fall in love with that, because I'll write forever. I'll write till I die. But for drumming, I'm just not feeling it anymore. And that doesn't mean I'm not playing well. The shows are shredding. We're having a blast. I hurt, because I'm playing hard, because the fans deserve that. So they are never gonna get a show that doesn't have us going full blast. But those shows are a toll on us, and me personally. And it's kind of shocking. And that's another thing too — I'm not young anymore, so the realization of being old has kind of set in as well. And I think it's a good time."

30yrs a drummer NEW release date...I'm excited to announce the new release date for 30yrs a drummer documentary and Trident Records soundtrack is October 15th. Along with being the release date, October 15th is my birthday as well, so it will truly be a great day to celebrate. A special thanks to all that have supported the documentary, for your patience and continued support.
Check out the brand new trailer!!!
For more movie & soundtrack info www.30yrsadrummer.com 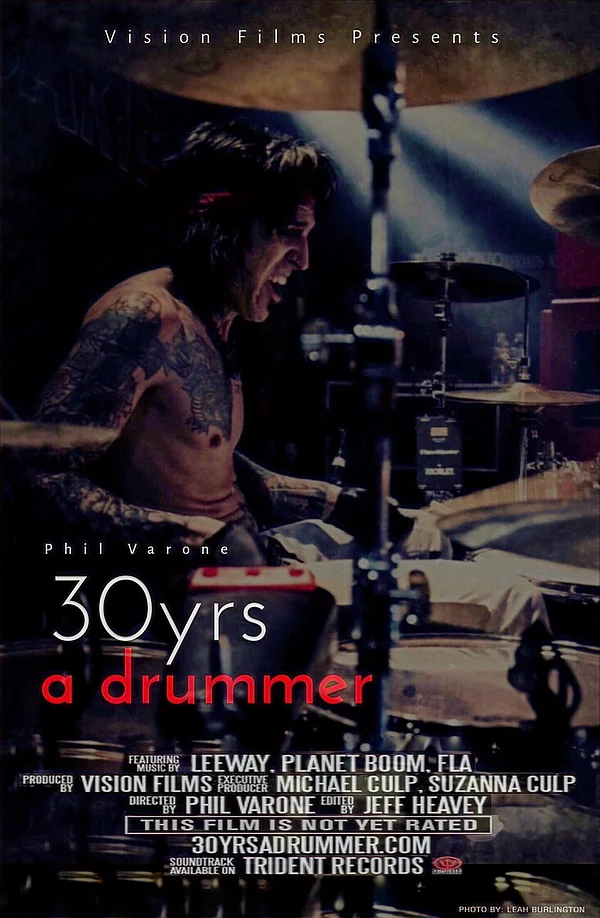