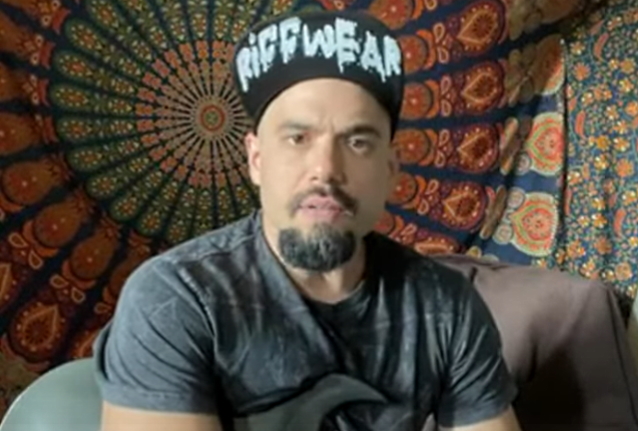 Rizzo was originally a member of the New Jersey Latin metal favorites two decades ago, appearing on their classic 2001 Roadrunner release "Revolution Revolucion" and the 2003 follow-up "Confession". After leaving ILL NIÑO, Rizzo had an 18-year stint with SOULFLY, which ended acrimoniously this past summer, with Marc saying that his association with SOULFLY simply "ran its course," while SOULFLY leader Max Cavalera accused Marc of spewing out "lies and bullshit" in some of his recent interviews regarding his departure from the band.

Rizzo broke the news of his return to ILL NIÑO during an October 6 YouTube livestream. He said (as transcribed by BLABBERMOUTH.NET): "We will be announcing it soon, but I'm doing some recording for the new ILL NIÑO record. And I'm super excited, man. It's a different band. It's not the band it was, obviously, for obvious reasons, from back when I was in the band, in 2002, when I left. A lot of things have changed. So I'm excited to work with these guys. It's great to reconnect with Laz [Pina, bass] and Dave [Chavarri, drums] and work with the new singer Marcos [Leal], who's an incredible singer. So I'm stoked, man. We're gonna record this new record. I'll probably — well, I am gonna do a tour with them soon, and we'll see what the future holds, man. They're gonna be announcing this very soon, and I'm very excited. Yes, I'm rejoining the band, which is awesome. I'm very excited to reconnect with my friends.

"Everyone loves a good reunion, and the fact that me and ILL NIÑO are working together again, it just goes to show that things can happen when everybody can meet up and talk and keep it between dudes," he continued. "Don't bring in managers and people's freakin' girlfriends and wives. You can have a reunion. And when dudes get in a room and just talk and work out anything from the past, good things can come out of it. So that's what's going on.

"More importantly than all that is the music," Marc added. "This new ILL NIÑO record is the best shit they've ever done. Again, the new singer Marcos is one of the best singers in metal. I mean, this kid is spot-on. He writes great stuff. He can sing; he can scream. So, this is really good stuff, man. I'm really excited."

Rizzo has rejoined ILL NIÑO as the replacement for Jes DeHoyos (SONS OF TEXAS),who recently left the band to focus on his family life. Rounding out ILL NIÑO's current lineup is rhythm guitarist Sal Dominguez (UPON A BURNING BODY).

"IllMortals" is slated for release before the end of the year via Break Silence Music (BSM),which is distributed through ONE-RPM.

ILL NIÑO's new LP will mark the band's first release since the departure of vocalist Cristian Machado, lead guitarist Ahrue "Luster" Ilustre and rhythm guitarist Diego Verduzco. Machado, Ilustre and Verduzco, along with Chavarri and Pina, announced in March 2020 that they had "reached a mutual, amicable and binding agreement" that will allow Chavarri and Pina to continue with ILL NIÑO while Machado, Verduzco and Ilustre move on with new projects.