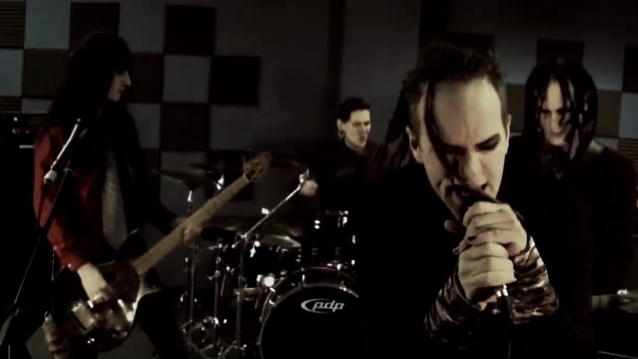 The group, which also features Ken "Mantis" Hoyt (CRUSHPILE) on vocals, TJ Cooke (METHODICAL) on drums, and Dante on guitar, will make its live debut on Saturday, June 1 at QXT's in Newark, New Jersey. An EP is tentatively due this summer.

Check out a video teaser below.

FACE WITHOUT FEAR is:

Eisen — whose real name is Tod Rex Salvador — has kept a relatively low profile for more than a decade since serving time for meeting and sexually assaulting two underage females in January and February 2005.

Two years ago, Eisen told Totally Driven Radio that his arrest and prison sentence was "a difficult time of my life" and insisted that he has "learned from it" and "grown. What happened to me was really bad judgment, terrible mistakes that I made, and I paid a price for 'em," he said.

Tripp added that "there were two cases [involving two separate girls]. I had to deal with both things. And I got through it. Yeah, there was two cases. It's been out there. It's been so long ago. But I'm here, I'm alive, I'm well, I survived it, and the fact that… It was difficult. I've written a lot of music in the interim. I reconnected with a lot of former friends, partners in the industry, different people I've worked with. I've been rebuilding some of my relationships with people, and it's been a blessing. I feel grateful for all the people that stuck by me. Sometimes it's hard to mend relationships, especially with a lot of the press I got — [it was] very hurtful and stuff — but I understand it; I understand where people come from."

Tripp said that he felt like he "lost everything" when he was arrested in 2005. "A lot of people have an earth-shaking or a life-changing event in their life, and if you lose everything, you can survive it, you can bounce back, you can grow," explained. "And I'm not gonna even say I lost everything, 'cause there's people that stuck by me. I had my family [that] was very supportive, and there's people that stuck by me. There's friends that came out of the woodwork — people I was just acquainted with, all of a sudden they're sending me letters [being] very supportive. Some people shied away, and then when I got out, I mended those friendships or re-established those friendships. It's awkward, but I think that you can bounce back. It's something that you can be inspirational. And I was inspired by a lot of people that have overcome even greater odds than I have. I'm here, I'm alive, I have music to play. My art is important to me. I've written songs. I've never given up hope. If I never was successful in music again, I have to be okay with that. But I feel like I've got something to say. I've got music I'm writing, I'm collaborating with people, writing lyrics, writing music."

Eisen rejoined his former bandmates in ROUGHHOUSE (formerly TEEZE) on stage in October 2016 at the Savfest at Whiskey Tango in Philadelphia, Pennsylvania. The concert was a benefit for people suffering from depression and mental health issues, raising suicide awareness and showing support for those who have lost a loved one to depression and suicide.