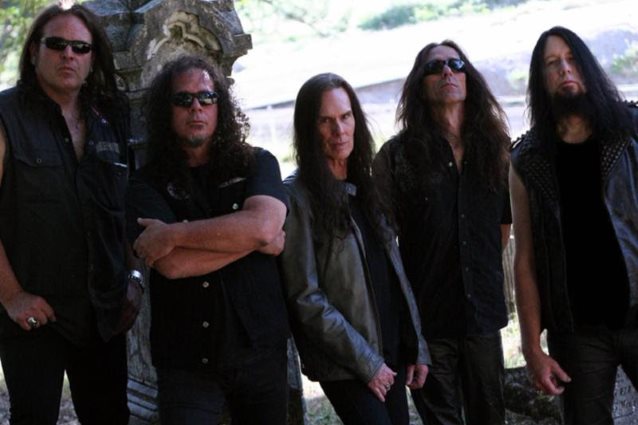 Former TESTAMENT bassist Greg Christian has joined TRAUMA, best known as the band that Cliff Burton played with prior to hooking up with METALLICA.

"TRAUMA is thrilled to welcome Greg Christian to our band," says the band in a statement. "His creative bass guitar work completes our music."

"Having grown up in the Bay Area thrash scene, it's a huge honor for me to play in TRAUMA," adds Greg Christian. "After all, this was Cliff Burton's (R.I.P.) band. Respect! Style-wise, for me, it's a perfect fit and feels like I'm finally exactly where I'm supposed to be."

TRAUMA is highly revered by those in the know as an important evolutionary entity in the intersection of traditional heavy metal, the New Wave Of British Heavy Metal, and the more melodically minded classic rock influenced bands on the Sunset Strip. TRAUMA is responsible for the much sought-after classic '80s album "Scratch And Scream", featuring killer cuts like "The Day All Hell Broke Loose" and "Lay Low". Three decades passed before the reconfigured band re-emerged in support of a re-mastered edition of their debut and delivered its 2015 follow-up, "Rapture And Wrath".

Now, staying true to their classic sound, TRAUMA is back with a merciless new track, "The Rage", produced by guitarist Joe Fraulob. The track will be featured on their upcoming third album.

With reverence for the past but eyes sharply focused on the future, TRAUMA entered 2017 preparing new material for what is certain to be a landmark third album, staying true to the signature sound that came before but with a very modern edge. Soaring melodies and fierce riffs collide in TRAUMA's new songs — equal parts sharp, fierce, grandiose, and theatrical. Since their formation, they've assembled the strongest elements of seemingly disparate strains of metal, with passion and proficiency. Instantly familiar vocals and melodies merge with modern riffage in the TRAUMA of today — a band that stands renewed and reinvigorated with a new lineup of seasoned players functioning as a supergroup assemblage centered around a classic nucleus.

In addition to the new inclusion of Greg Christian, TRAUMA co-founder/vocalist Donny Hillier and longtime TRAUMA drummer Kris Gustofson put together a monstrous lineup of amazing players. Guitarist Joe Fraulob is a former member of multiplatinum hard rockers DANZIG and DECONSTRUCT. Steve Robello played guitar in DUBLIN DEATH PATROL — the Bay Area supergroup formed by the singers of EXODUS and TESTAMENT — and was also formerly with the group HEIST.