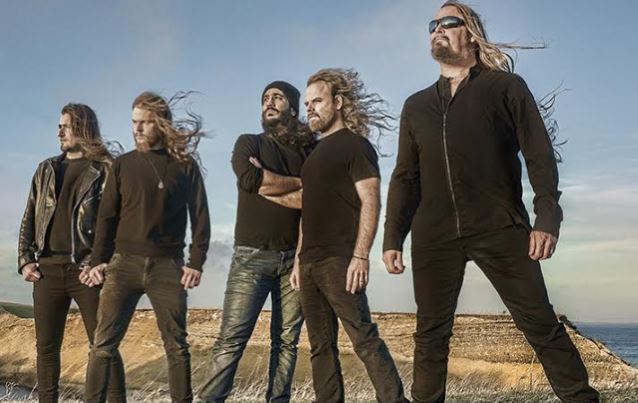 ONE MACHINE, the brainchild of acclaimed guitarist/songwriter Steve Smyth (TESTAMENT, NEVERMORE, FORBIDDEN, DRAGONLORD, VICIOUS RUMORS),has entered the studio to record its second album, due later in the year.

Commented Smyth: "We have had a great year in 2014, seeing our debut album released, getting it out to YOU the fans, and getting on the road as well! Along that road, we hit a few 'bumps,' and a few people fell out of the cart, so to speak. As a result, we have had to say goodbye to Mikkel Sandager [vocals] and Tomas Koefoed [bass], due to differing but completely reasonable and understandable life decisions for both. We amicably split ways, and wish both of them the best for the future. As a result, we welcome Chris Hawkins (ENDEAVOUR) on vocals, and Stefano Selvatico (ex-SAVAGE MESSIAH) on bass guitar.

"Realistically, Chris stepped in for Mikkel at Royal Metal Fest, and has been with us ever since. His voice is a very welcome addition; he has an incredible range, many distinctive characters to his voice, and incredible stage presence! We are very happy to bring him into ONE MACHINE. You'll hear him soon enough, as we have plans to introduce Chris to you through not only new music down the road, but very soon to songs from the debut, so you can hear EXACTLY this guy is capable of!

"Stefano has spent time with rising U.K. thrashers SAVAGE MESSIAH, and others, and, having seen him play Iive a few times, I knew he had the chops and stage presence to carry this gig like no one else could. Stefano filled in for Tomas on our last gig of the year last December, and with minimal rehearsal (three days),learned our set and came out all guns blazing.

"Now we begin a new chapter in the future of ONE MACHINE, with a new lineup, and we're in the studio working on this second album at Death Island Studios in Denmark! We've been very fortunate to obtain not only a great studio along with the services of Marco Angioni, but we've enlisted Mr. Tue Madsen (THE HAUNTED, SICK OF IT ALL, DARK TRANQUILLITY) to handle co-production, mix and master of the album.

"This album sees ONE MACHINE growing into our sound a little bit more; still retaining the heaviness and thrashiness of before, with big choruses and lots of shredding, but somehow the riffs and songs I've written this time are a bit more darker and moody, and Chris' vocals bring an entirely different range of emotion and delivery to them!

"Stefano is finding his way around the ONE MACHINE sound very quickly, adding his sound and depth, and chops to the songs."

ONE MACHINE will embark on a U.K. tour in April.