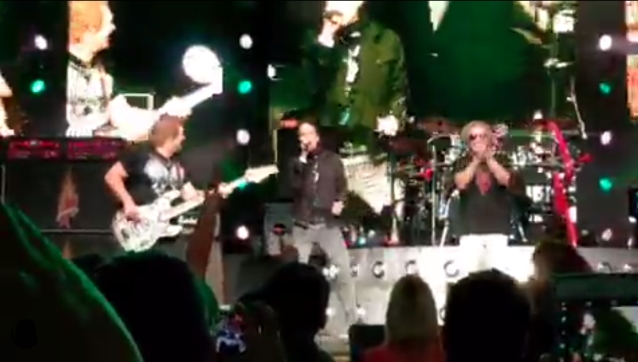 EXTREME singer Gary Cherone joined SAMMY HAGAR & THE CIRCLE on stage this past Tuesday (May 28) at Rockland Trust Bank Pavilion in Boston, Massachusetts to perform a cover version of the LED ZEPPELIN classic "Rock And Roll".

After the concert, Sammy Hagar wrote on Instagram: "Gary Cherone and Pat from extreme came down to the show in Boston tonight jammed and showed some local love #boston #thankyou #bruins #thecircle #fullcirclejamtour #VanHalenAlumni #backstage."

VAN HALEN's third frontman, Cherone took over when Hagar left the group (or was fired, depending on whom you ask) in 1996.

Asked how it happened that he ended up lead singer of VAN HALEN, Cherone told The Washington Times in a 2016 interview: "I don't know if it was the stars aligned or I was at the right place at the right time. Our manager was also managing VAN HALEN. I got a tryout. I flew to L.A. thinking to myself, 'I'm gonna spend the weekend singing VAN HALEN songs with the band. Then coming back home to Boston with a great VAN HALEN story to tell.' That's how I approached it. I remember on the flight, Nuno [Bettencourt, EXTREME guitarist] saying, 'Why not you? Go for it.' I didn't have any expectations. By the second day, me and Eddie [Van Halen] hit it off and wrote 'Without You', the first track on the record ('Van Halen 3'). I was then asked to join the band."

Cherone also offered his theory as to why his collaboration with VAN HALEN didn't work. He said: "Looking back, if I was to do it all over again, I would have liked to tour with the band before I made the record. I think the record had some good songs on it but fell a little short production-wise. But they treated me great. It ran its course. The record didn't live up to expectations. We were starting to write the second record and things got a little dysfunctional."

Back in 2012, Cherone told Rolling Stone that it was "surreal" to walk onstage with VAN HALEN for the first time. He said: "We were in New Zealand and they were going to broadcast one of the first shows live. I got into a fight with the manager. I said, 'You're going to put this on video and I've only done three shows with this band? Let's do a video at the end of the tour so I can feel comfortable.' I remember being stressed out, but I felt comfortable. For me, all during the making of the record I couldn't wait to go on tour because that was my comfort zone. I was dying to get out there and play some new songs, play some old songs. Of course you're going to get the die-hard fans who are never going to like you no matter what you do. But most of the time, 90 precent of the audience was thrilled that I was singing the old shit. Two thirds of the set, if not more, were songs VAN HALEN fans hadn't heard in a very long time."

Eddie Van Halen told Billboard in 2015 that he definitely didn't bond with Cherone over clothing choices. "We were getting ready to go on tour, and all of a sudden I see this John Travolta outfit — these big lapels and a crazy jacket," Eddie said. "He's like, 'This is my stage outfit.' That's when I realized it wasn't going to work."