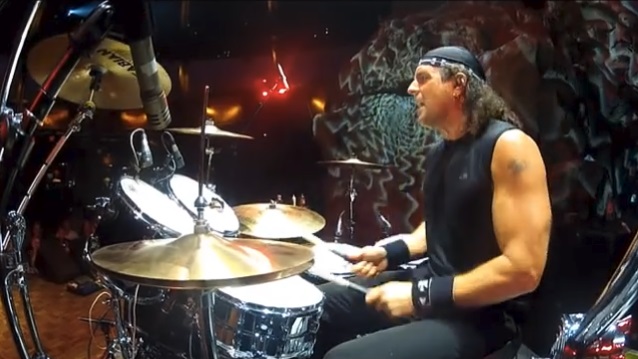 Veteran rock drummer Bobby Rock (VINNIE VINCENT INVASION, NELSON, LITA FORD) will tentatively release his memoir, "The Boy Is Gonna Rock: A Drummer's Journey From Houston To Hollywood In Search Of Hair Metal Heaven", in May.

Describing the book as "a very detailed and personal 12-chapter memoir about the entire VINNIE VINCENT INVASION saga," Rock said that he was originally going to release it in 2017, "but then I heard about Vinnie's impending appearance at the Atlanta KISS convention and decided to hold off. I didn't want to muddy the waters in any way for Vinnie's long-awaited return," he explained.

Regarding his decision to release "The Boy Is Gonna Rock" now, Bobby said: "A couple years back, I had posted a few memoirs of my early days with VINNIE VINCENT INVASION on my blog. People seemed to freak over them, so I figured I should probably do an entire memoir on the VINNIE VINCENT INVASION saga. So in early 2017, I started cranking up the hours and mowing through the manuscript. And then, just as I was getting close to completing a first draft, the highly improbable happened: it was announced that the V-Man himself would be coming out of hiding for an exclusive appearance at a KISS convention in Atlanta. Holy shit!

"Honestly, I was as pleasantly stunned to hear about this as anyone else. However, I decided to rethink my initial release date for this book and, instead, wait until after Vinnie's recently announced appearance. I didn't want there to be any form of distraction relating to Vinnie's return to the public. I thought it would be best for Vinnie to talk about what he wanted to talk about, and answer questions the way he wanted to, as opposed to having to potentially address assertions from my side of the elephant."

"The Boy Is Gonna Rock: A Drummer's Journey From Houston To Hollywood In Search Of Hair Metal Heaven" will initially be available through a PledgeMusic campaign, which will kick off in March.

The book's preface can be read at this location.

Bobby previously said that landing the VINNIE VINCENT INVASION gig out of a once-in-a-lifetime audition opportunity in 1985 "was one of the most unforgettable memories I've had in my professional career. Unfortunately, recording the first INVASION album two months later would also be one of my most 'unforgettable memories'… but for reasons I would rather forget!" he said.

Bobby was a member of VINNIE VINCENT INVASION for three years — from October 1985 until the band's split in October 1988.He later told KissMonster.com in an interview that "Vinnie was an extremely complex character... not exactly the kind of guy where it was always smart to be completely forthcoming about the truth (as I would later find out the hard way)… Looking back, I feel like Vinnie was probably less of a liability and more misunderstood, mishandled and mismanaged all the way around. It seemed like, on a certain level, he was being 'imaged' as more of a super-glam, wild and crazy rock star kind of character, when he should've been handled more like a private Ritchie Blackmore kind of character, which is more what he was like. I mean, someone like [POISON guitarist] C.C. DeVille really is that character you see... it's authentic to him. But Vinnie was actually a very private person and — as everyone now knows — a family man with a wife and two young daughters. He didn't drink or do drugs and had a nice, normal life in an L.A. suburb. He wasn't the kind of guy to go out trolling the Sunset Strip, banging different girls every night. (The rest of us, however, were a different story back then!) Of course, the public didn't have to know anything about his private life, but it could've at least been left to their imagination. I don't know how comfortable Vinnie was with all of that glam shit, but I don't think he was always represented authentically. Now whether this was Vinnie's undoing or just how he was steered, I couldn't tell you."