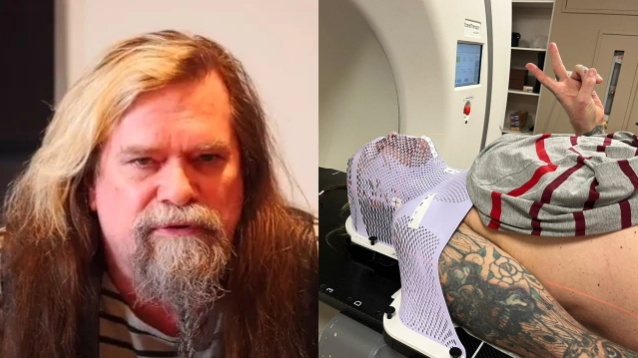 Former W.A.S.P. guitarist Chris Holmes has completed his sixth week of radiation therapy in his battle with cancer in throat and neck.

Earlier today (Monday, April 18),the 63-year-old musician's wife and manager, Cathy-Sarah Holmes, who first shared the news of his diagnosis in a social media post in February, issued the following update on his condition: "The second chemo made Chris really sick and made him throw up. He was unable to eat for few days which meant he's lost weight. Last Thursday was a better day where he restart to eat a little (2 complements) but today his throat is burning, so that eating is more and more difficult, then we are thinking maybe for 2 weeks it will be more easy for Chris to have a tube in his nose for eating. Just to give time for his throat heal and Chris to feel better. We will talk about that with the doctor tomorrow. The good news is Thursday (21st April) will be the last radiation. Even if we know that the 3 next weeks will be difficult at least he will heal at home, without having to go to the hospital every day .

"Chris is staying positive even being in the worst pain he's ever had."

Firstly, I’m sorry to be late with the 6 week update.

The second chemo made Chris really sick and made him throw...