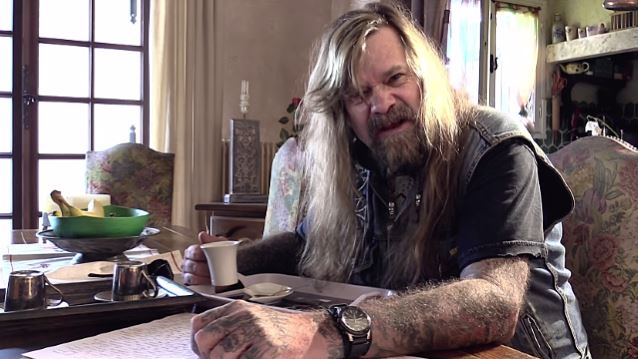 Holmes last year released a solo album called "Nothing To Lose". Chris composed, performed, and produced the music and vocals, and teamed up with former MOTÖRHEAD drummer Phil "Philthy Animal" Taylor to perform on and engineer the effort.

Asked if he would ever rejoin W.A.S.P. if had the opportunity, Holmes told Seiska TV: "Never say never. Never say never. You know?! I'm half of W.A.S.P.; I was half of the situation. Even though I am not the voice [of the band], or whatever, I was the driving force of that thing."

Holmes earlier in the year relocated to Cannes, France with his wife. Speaking to Riff-Mag.com at this past summer's Hellfest in Clisson, France, Holmes said: "I left in February, L.A., I left — gone. I don't plan on going back. I'm gone. I ain't going back to America… At all. I left. Gone, History. I sold everything I had there."

Asked why he decided to leave the USA, Holmes said: "Well, unless you're the opposite of me — a hip-hop artist or a rapper — you won't sell in America anymore. There's no rock magazines anymore. The black culture has really… The black culture has taken hip hop to white… The white culture and all the kids act like that; they wear their pants down. I think it's… I'm not 100 percent sure, but I when they go to school and they listen to hard rock, it's called 'pussy music.' [They are told] 'You need to listen to gangster rap.' I think that's what it is."

He continued: "I really looked at it in the last year and the way the culture has changed, and I don't wanna even be there. I had a hard enough time playing in a band in L.A., finding musicians. I'm tired of L.A., tired of the musicians there; they're stuck up. That's why I came to Europe. I like it here."