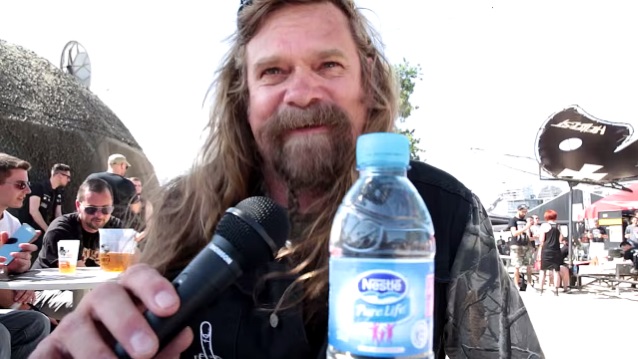 Former W.A.S.P. guitarist Chris Holmes, who recently relocated to Cannes, France with his wife, is searching for musicians to join him in a new project called MEAN MAN. Speaking to Riff-Mag.com at last month's Hellfest in Clisson, France, Holmes said (see video below): "I left in February, L.A., I left — gone. I don't plan on going back. I'm gone. I ain't going back to America… At all. I left. Gone, History. I sold everything I had there. I left my dog there. I'm gonna send for him."

Asked why he decided to leave the USA, Holmes said: "Well, unless you're the opposite of me — a hip-hop artist or a rapper — you won't sell in America anymore. There's no rock magazines anymore. The black culture has really… The black culture has taken hip hop to white… The white culture and all the kids act like that; they wear their pants down. I think it's… I'm not 100 percent sure, but I when they go to school and they listen to hard rock, it's called 'pussy music.' [They are told] 'You need to listen to gangster rap.' I think that's what it is."

He continued: "I really looked at it in the last year and the way the culture has changed, and I don't wanna even be there. I had a hard enough time playing in a band in L.A., finding musicians. I'm tired of L.A., tired of the musicians there; they're stuck up. That's why I came to Europe. I like it here."

Holmes also offered an update on his studio and touring projects, telling Riff-Mag.com, "I just got done doing shows up in Finland with some friends of mine — I played the last one two weeks ago — and this project didn't go as long as I thought it [would], so I decided to come here to put my band together.

"I've got [a solo] album out. It's called 'Nothing To Lose', out right now. And then I've got one that's already recorded, all last year, 12 songs. It's called 'Shitting Bricks'. But it's not mixed. It's just gotta be mixed. So it's already in the can."