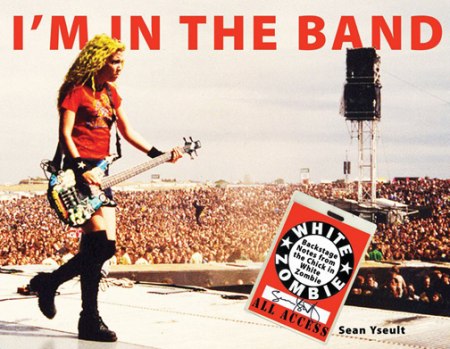 Art rock? Noise rock? Punk-metal? Alternative? WHITE ZOMBIE may have been unclassifiable, but it didn't stop them from carving out a place for themselves in music history. The band became a multiplatinum, two-time Grammy nominee with the release of their 1992 album, "La Sexorcisto". But while most people will remember their bizarre look and macabre lyrics, what many failed to realize was that their lanky, high-octane bass player was a woman.

"I'm In The Band" charts WHITE ZOMBIE's rise from the gritty music scene of New York's Lower East Side in the Eighties to arena headliners during the Nineties alternative-explosion that followed in NIRVANA's wake, while sharing the unlikely story of a female musician who won the respect and adoration of male metal musicians and fans. From 1985 to 1996, Sean Yseult was the sole woman not only in WHITE ZOMBIE, but in the entire metal scene: bands, roadies, managers, you name it — with the exception of girlfriends and groupies, Yseult was in a world by herself.

With "I'm in the Band", Yseult combines eleven years of tour diaries, flyers, and personal photos and ephemera — many featuring rock icons such as Ian "Lemmy" Killmister, Iggy Pop, Joey Ramone, and Lux Interior — into a striking visual memoir. She offers fans a unique vantage on the life of a mega-band during rock's last golden age.

About the author: Sean Yseult played bass and wrote music for WHITE ZOMBIE from its inception in 1985 through its breakup over a decade later. Since then she's played with FAMOUS MONSTERS, ROCK CITY MORGUE, and THE CRAMPS; exhibited her photography in galleries across the country; and formed the design company Yseult Designs. She divides her time between New Orleans and New York City.

Commented former WHITE ZOMBIE guitarist Jay Noel Yuenger (a.k.a. J.): "WHITE ZOMBIE's like a black hole. For most people, it's like we popped up out of nowhere, and then, a couple of years and a couple of platinum albums later, we disappeared. There's almost no documentation of the history of the band, and so this is something of a mindfuck for me because it's all here.

"I helped out a little while Sean was putting the book together as far as contributing some photos and memorabilia, remembering names and dates, but I just wasn't prepared to see the entire timeline .. from the earliest days in Brooklyn, to my joining, to getting big, to breaking up .. laid out and illustrated like this."

When asked about WHITE ZOMBIE's 1998 split in a November 2008 interview with Beowolf Productions, Yseult said, "We definitely saw it coming. Rob [Zombie, WHITE ZOMBIE mainman] had actually stopped speaking to us, especially me, the last two years, and hired his own tour bus. It was pretty unbearable, even for the crew, when it should have been the best time of our lives."

Regarding whether she would ever consider doing a WHITE ZOMBIE reunion, Yseult stated in the same interview, "We've always said never, but someone posed the question of doing it with a Rob replacement, which would be pretty funny since he ran around the country with a WHITE ZOMBIE cover band for years! Our manager tried to get J. and I to do that right after breaking up, but it just seemed tacky at the time. I have to admit now it might be fun."