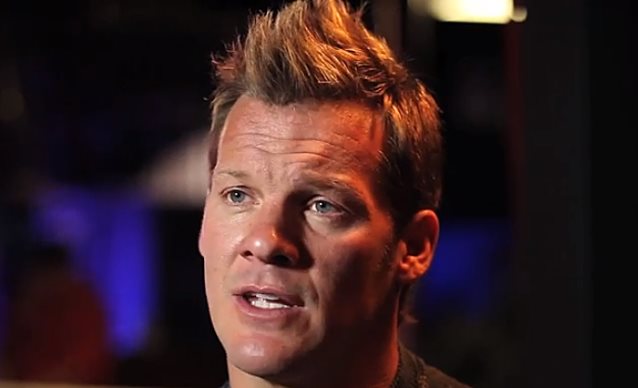 Jason Price of Icon Vs. Icon recently conducted an interview with FOZZY singer and WWE wrestling superstar Chris Jericho. A couple of excerpts from the chat follow below.

Icon Vs. Icon: Is there musical ground you are anxious to cover?

Chris: We have already started writing songs for the next record. We will be focusing in even more on what we do best — the groove, the space, the heaviness and the melodies. As much as we love IRON MAIDEN, JUDAS PRIEST, DIO and a lot of new bands like STONE SOUR, AVENGED SEVENFOLD and BULLET FOR MY VALENTINE, we also have a big appreciation for JOURNEY, FOREIGNER, STYX, QUEEN and THE BEATLES; bands who used a lot of harmony. We like the days where every guy in the band sang! We really want to continue those days. I think one of the reasons we have been doing so well because FOZZY is a little bit different than the norm and that has helped us get to the next level.

Icon Vs. Icon: Where are you in process of creating this new material for a new FOZZY album?

Chris: We are going to go back into the studio starting in January. We are writing now and we want to have this thing released for the summertime. It is would be perfect timing for putting out a record, where we can go tour with at all the summer festivals and tours. We are getting everything sorted out and organized right now. Like I keep saying, there is just so much momentum from "Sin And Bones", we want to keep that rolling and the elevation continuing along!

Icon Vs. Icon: Speaking of new music, where do you find yourself looking for inspiration as a songwriter?

Chris: I just go by songtitles. If I see an interesting phrase, something that piques my interest, I will write it down and work my way backwards from there. Obviously, there are a lot of different places you can derive lyrics from. Personally, I like imagery lyrics. If you look at "Sandpaper" or "Spider In My Mouth", they are more imagery driven, rather than literal, visceral meanings. I also like relationship-type songs like "In My Head" or "Shine Forever" or "Feed My Addiction". Then you have the more fantastic ones like "What Happens", "Past Life" or "Dark Passenger", which was loosely based on 'Dexter", or storm — "Storm The Beaches" is about being in World War II. It is just whatever catches my eye, but it typically starts off with the song title.

Icon Vs. Icon: Last time we spoke, you had been giving some thought on doing a live DVD release to capture the live show. Any movement on that front?

Chris: Yeah, we just filmed a set at Bloodstock, which is a big festival we played in England a few weeks ago. Once we have that all organized and ready, I am sure it will be released before the new record or if nothing else, with the new record as a bonus disc.
Icon Vs. Icon: Last time we spoke, you had signed a book deal for a third autobiography. You had mentioned wanting to start chipping away at it while on tour. Where do you stand in that process?

Chris: I did actually start it. A couple of weeks ago we were in Austria and I finally bit the bullet and started working on it. I am about 85 pages in. Once you kind of crack the seal and get to work on it, it becomes addictive. That is what you need to write a book because it is a huge project that takes a lot of effort. I have a couple of great books to live up to, so I have a certain level of quality to meet as well. All of those factors lead you to waiting for the right time. Once you get started, it is hard to stop. That is where I am at right now, so hopefully it will be out next year. I am not sure exactly if it is supposed to be out in the fall or winter. I know what my deadline is and I am late! Fire it up!