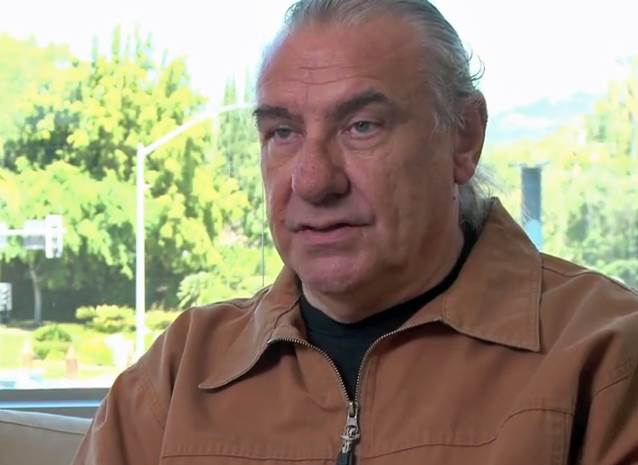 Ara Harris of Virago Magazine recently conducted an interview with legendary BLACK SABBATH drummer Bill Ward about his groundbreaking collection of fine art created from rhythm. A couple of excerpts from the chat follow below.

Virago Magazine: What songs have created the most vivid pictures based only on rhythm?

Bill Ward: All of the songs that I played with BLACK SABBATH, but the first song that comes to mind is "Black Sabbath". It is full of passion and I regard it as our rallying point. So the energy on stage when we play "Black Sabbath" is absolutely outstanding. I visualize just a huge sound and I mean, it's a huge sound. I put myself into it wholeheartedly to create as much volume as I can with my symbols… whatever I can to add more to this ominous sound. A typical visual would be "Iron Man". People say… "How did you begin 'Iron Man'? How did you create 'Iron Man'? How do you make people think it's 'Iron Man'?" So the only thing I could think of was a bass drum. Ozzy put a vocal on and I could see "Iron Man" — I could visualize "Iron Man".

Virago Magazine: When I first heard about your art, I never imagined that rhythm could produce images that were so intricate. I looked at a lot of pieces and I was particularly fascinated with the piece "Hello I Don't Think We've Met (Yet)". I think I stared at that piece for about 25 minutes. I could see so many pictures within a picture.

Bill Ward: There has been some manipulation. It's true, I created a lot of streams and things but there was a lot of camera work that was put into this, as well. So some of the actual faces and figure heads that you can see in there were created by camera imagery. I'm not sure what these guys did, but I think there were some techniques that they might have used to do that. For me, I didn't actually paint those while I'm drumming, I can't bring about that image. So, does it feel like that's misleading now? Is that upsetting to hear?

Virago Magazine: No, it's not upsetting to hear I'm just wondering how you felt when you saw that picture. Did you appreciate that they did that…that they manipulated with the cameras or would you have preferred them to stay more organic?

Bill Ward: At the time of doing this, I really didn't have a whole lot of information on what the cameras were going to materialize. As we were doing the shoot, I would say… "Is everything OK?" I was kind of blind. I was handed different colored sticks and I played as much as I could. I played different beats to create as many shapes as I possibly could and a lot of that shows up on the pictures. However, I didn't know that there was going to be some camera added work. When I saw it, I was like… "Well, that's interesting. Not quite sure how I feel about that." But then I was asked to title the pictures and that was when I felt fully involved. Not only as a drummer playing a fury of drum patterns but involved because I was able to look at the pictures and see that there was a lot more happening to me than I was aware of. I've been quite emotional lately over issues that were going on. I've been sad. A lot of different feelings. So when I looked at the pictures, I thought… "My God, these pictures really seem to actually show my emotions." For instance, the piece "Grief". I have no idea how that picture came about. And when I looked at it the only thing I could think about was grief because I've been grieving terribly for about eighteen months. And I felt such sadness. So, when I looked at it, I looked at my grief and that's when it became personal. That's when it became vulnerable. That's when it became much more than playing drums with different types of sticks. It became more than just camera people, three of four different cameras going off, lots of different lighting attitudes what have you. It became more than that. It turned into something really therapeutic, really personal, and really vulnerable.