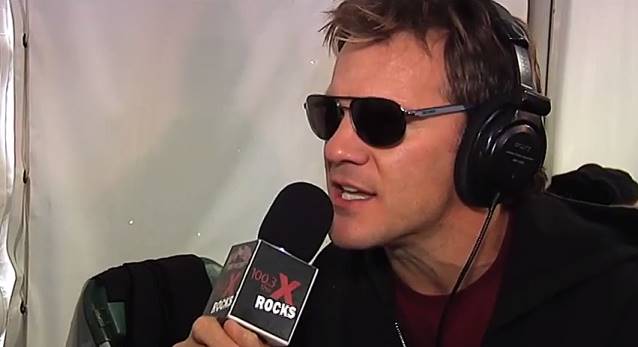 Nic and Big J of the Boise, Idaho radio station 100.3 The X Rocks conducted an interview with FOZZY singer and WWE wrestling superstar Chris Jericho at this year's Rock On The Range festival, which was held May 16-18 at the Columbus Crew Stadium in Columbus, Ohio. You can now watch the chat below.

FOZZY released a new single, "Lights Go Out", on April 29 across all digital platforms. The release coincided with the track's impact at Active Rock radio, and was the first single from the band's upcoming sixth studio album, "Do You Wanna Start A War?", set to hit stores this summer.

Asked about whether FOZZY's upcoming CD will feature any special guests, Jericho said: "I mean, we always have a guest or two on every record, because… It's interesting when you see… You listen to Top 40 radio — every radio when I drive my kids to school, we listen to it — and you'll always hear Jay-Z plus Beyonce, or featuring Beyonce, or Rihanna featuring Lil Jon. And we thought, why don't we do more of that in rock and roll? I man, that's what we did. The last record, we had 'Sandpaper' with M. Shadows [AVENGED SEVENFOLD] and we had 'She's My Addiction' with Phil Campbell of MOTÖRHEAD. So this record we have one collaboration — a song called 'Tonight' with Michael Starr from STEEL PANTHER, who we toured with in Australia; a great singer. And we like that vibe. Musicians like jamming with other musicians; it's kind of what we do."

Regarding FOZZY's musical uproach on "Do You Wanna Start A War?", Jericho said: "We wanted to do something a little different. We love, obviously, AVENGED SEVENFOLD or FIVE FINGER DEATH PUNCH, we love IRON MAIDEN, we love OZZY [OSBOURNE]. But we also love PINK FLOYD and LED ZEPPELIN and QUEEN and U2 and THE BEATLES, bands that would always broaden their horizons, but still sound… the core of the band's sound was still there, but they would different things. And when we were listening to a lot of songs on rock radio, we felt that they fit a certain pattern. We wanted to do something that was different from that, and that's what 'Lights Go Out' kind of came from that mindset. So it is a different type of tune, but we wanted to do that and shake things up and take a chance. You know, when you do something like that, sometimes your hardcore fans will go, 'Well, this isn't what we've heard before,' but they'll eventually like it. And you do this to appeal to new fans, and that's what we're getting from 'Lights Go Out', who'd never heard FOZZY before, who'd never listened to FOZZY. 'Man, you guys rock! This song is amazing!' That's what you want…. This is a song that you can hear in a strip club, you can hear it in a dance club, you can hear it in next to a SLAYER song. It's kind of got all things to all people. 'Cause all that matters with music and a good song is the melody and the hook. And this has a great hook; you could catch 'Jaws' with this hook, that's how big it is. But it's dark, it grooves, it's sexy, it's sleek, and the chicks dig it, which is the most important thing. 'Cause when the chicks like something, that means the guys will follow."

The band returned to the North American tour circuit in late April, where they are making crowds move on America's biggest festivals, including appearances alongside AVENGED SEVENFOLD, VOLBEAT, ROB ZOMBIE, SLAYER and more at 98 Rockfest, Welcome To Rockville, Carolina Rebellion and Rock On The Range. FOZZY is also playing dates between festivals in support of BUCKCHERRY, co-headlining with KYNG, and sharing their stage with GEMINI SYNDROME, REV THEORY, HEAVEN'S BASEMENT and Century Media Records labelmates EYES SET TO KILL.

Also recently annouced is the October 13, 2014 release of "The Best In The World: At What I Have No Idea", Chris Jericho's third autobiography and the sequel to his New York Times bestsellers "A Lion's Tale" and "Undisputed".

Still can't get enough Jericho? Check out the "Talk Is Jericho" podcast, which features the multi-faceted superstar interviewing guests from the all over the world of pop-culture and entertainment twice weekly, every Wednesday and Friday. The podcast has already reached No. 1 in seven countries and is one of the marquee programs on the PodcastOne network, featuring guests as diverse as comedian and TV host Howie Mandel, ghosthunter Jeff Belanger, professional athletes and wrestling superstars, and fellow musicians such as Dave Mustaine, M. Shadows and Ace Frehley.