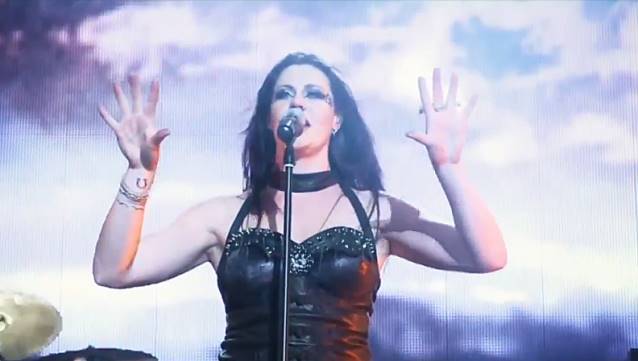 The Great Southern Brainfart recently conducted an interview with NIGHTWISH and REVAMP singer Floor Jansen. A few excerpts from the chat follow below.

The Great Southern Brainfart: What is a question that you get asked way too frequently during interviews?

Floor: Um, well, no so much in just interviews but particularly here, every freaking day is, "How tall are you?" [laughs] It's, like, does it matter if I an 6 feet? 6'2"? 5'9"? It's tall. You have eyes in your head and you see that I'm taller than average. Why do you have to point it out 100 times a day? In general, I also don't like getting questions that ask about my opinion on things. "What do you think about the singer of…" or "What do you think of this band…" things like that.

The Great Southern Brainfart: I feel like a lot of times people use interviews to spark some sort of controversy, but for me I like to have a conversation, you know? Get to know a person.

Floor: Exactly. I mean, of course there can be a personal interest that can only make a conversation nicer. Like you're telling a story that other people will read or hear so the questions should interest everyone. I'm here because I'm a musician and an artist. Not because I'm Floor Jansen who wants to talk about my personal life. I mean, it doesn't matter what my favorite color is for the music that I right. I prefer to really focus on those kinds of conversations, and unfortunately, not all people get that.

The Great Southern Brainfart: Being the singer of both NIGHTWISH and your own band REVAMP, do you consider REVAMP your baby, so to speak, and where you feel like you'd like to put most of your focus?

Floor: No, actually, I consider both NIGHTWISH and REVAMP equal. I mean, of course I started REVAMP, but I connected with NIGHTWISH, so well both musically and personally. I don't see that as just a project. NIGHTWISH is my band and so is REVAMP. They both get my 100 percent, which is why I also cannot do them both at the same time. They're both my babies.

The Great Southern Brainfart: I wanted to ask you a bit about your burnout phase that was documented in the REVAMP suite "The Anatomy Of A Nervous Breakdown". As a creative person, I can totally identify with this and I'm sure others can as well. How did you come out of that dark place to emerge as strong as you did?

Floor: For me it felt like, "I'm sick. I'm too sick to do anything." It wasn't just a moment of not feeling well or not having energy. It was a complete breakdown. I was literally unable to do anything. I couldn't even go grocery shopping or to a mall. Any kind of big spaces, loud noises, places like that. This wasn't something that was there for a month. This is something that happened over a year. I think everyone has this happen in their own way and the only way to come out of it is to acknowledge it. I personally ignored it way too long which is why it took so long to get so deep. It's a scary thing.

The Great Southern Brainfart: Since then, do you find yourself doing things a bit differently to avoid that from happening again?

Floor: Yes, definitely. It's not really about the amount of work because, honestly, I've never worked as much as I do now, weird enough. It's more about the way of doing things.

The Great Southern Brainfart: So it's not so much how hard you're working but how much you're mentally and emotionally putting into your work?

The Great Southern Brainfart: Floor, you have some pretty diehard and at times fanatic fans. Is it ever too hard or overwhelming to go out and face them after a performance?

Floor: Yes. Very much, and I don't that a fan should expect that of you either. They are there for your show, and if there is energy left, then sure. On a day like today, when you're playing 30 minutes, I'll have some energy left to meet people. Nine out of ten days I do, but when you play for an hour and a half or longer, everything you have goes in and then afterwards I don't have the energy, because it's just too much. The people take a little bit of you every time. I really like to meet people, but only when I have the energy for it. If I don't have the energy for it, it's nothing personal towards the crowd. It's not like they weren't nice enough or friendly enough or supportive enough. It's just how it is. They want me to be healthy, happy, and a good musician. I'm not someone that you personally have to meet. That's a luxury and not mandatory.

The Great Southern Brainfart: This is a really interesting thing to hear, Floor. Fans do tend for forget just how much of yourselves you're giving us from the stage night after night.

Floor: Exactly. And it's never just meeting someone. It's always more. It's one picture, and then, "Can I have another picture, a signature, another signature? I want, I want, I want." Yeah, I want things too. Can I have a beer? Can I have some personal space? [laughs] I know from the fan's point of view, it's, like, "This is the only second in time that I have with my favorite artist." I understand that they want to make the best of that moment, but I sometimes wish that people would think a little bit more from our point of view. Sometimes people do see it and that's nice. For instance, somebody brought me drinks and said, "I don't want you to run out of drinks while meeting people so here." That was very nice and it's an interaction. You're happy to see me, I'm happy to be here, but don't feel like you can just take take take.