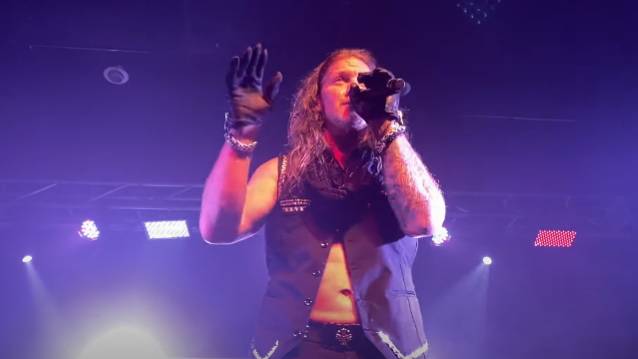 In September, FOZZY postponed the remaining dates of its previously announced summer/fall 2022 "Save The World" tour due to a throat injury suffered by the band's lead singer, wrestling superstar Chris Jericho. According to FOZZY, Jericho sustained a bruised larynx in August at the AEW "Quake By The Lake" event in Minnesota where he squared off against Jon Moxley for the interim AEW world championship.

Earlier this month, Jericho offered an update on his recovery in an interview with Australia's "Everblack" podcast. He said about his voice (as transcribed by BLABBERMOUTH.NET): "I didn't need surgery, but I did have a bruised larynx, a bruised vocal cord. So I basically had to relearn how to sing, which gave me so much more endurance and power. And there's still certain notes that I'm not hitting yet, 'cause I'm still recovering; it takes a long time. It's such a sensitive area. If you break your arm, six to eight weeks, you're fine. This is not like that. But you just learn how to sing around it. And we have also four great singers in our band. So I also realize I don't have to sing every single note because [bassist] P.J. Farley can sing great, [guitarist] Billy Grey sings and [guitarist] Rich Ward sings. So it's almost more of a DEF LEPPARD approach where I don't have to do every single moment. So we really learned about our band vocally. And I think even though my voice isn't a thousand percent — it's probably nine hundred — the band sounds so much better because everybody's really singing well and getting more of a chance to sing. And I think in the long run it's gonna be beneficial to FOZZY that I bruised my larynx when I did."

Asked if it was scary after he first sustained his throat injury, Jericho said: "Yeah, it's scary because you don't really know what the hell's going on. And then you start hearing, well, it could be permanent. And what does that mean? What am I going through? And then you realize that it just takes time. And also too, if you — I don't know — if you're a baseball pitcher and you're used to throwing a hundred miles an hour, if you fuck up your shoulder, the first time you throw a ball [after that], it's not a hundred miles an hour. You've gotta start slow and work your way back up. And I didn't realize that. I basically had to, like I said, relearn how to sing, which I didn't know I'd have to. I figured, 'The larynx will get better and then I'll just be able to hit super-high notes again.' And it's like, eh, it doesn't work that way. You've gotta glide your way up there and figure it out. So it made me a better singer in the long run, for sure."