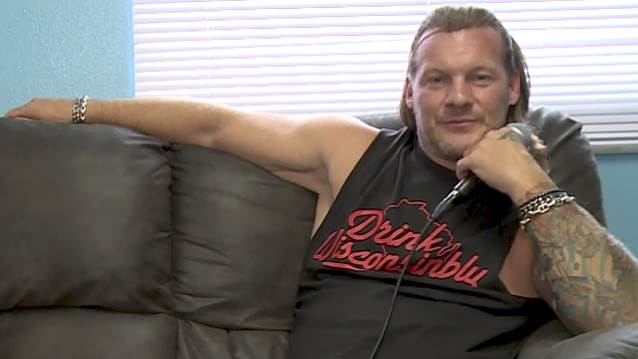 FOZZY's CHRIS JERICHO: 'There's Not A Lot Of Bands That Keep The Audience Engaged Like We Do'

FOZZY frontman Chris Jericho has told HardDrive Radio's Lou Brutus that he has "learned a lot from KISS" about how to put on a great live show. "Let me explain what I mean by that," he said (see video below). "When you go to a KISS show, every song has some kind of gimmick to it. 'Love Gun', Paul [Stanley] flies across the stage; 'God Of Thunder', Gene's [Simmons] up with the blood; 'Rock And Roll All Nite', there's confetti; 'Shock Me', that's when Tommy [Thayer] has the smoke coming out of his guitar. There's always something. And so every FOZZY song in our set has an element to it. And I think that's important, because you're not just selling the songs, you're selling the band.

"Our shows — and I'm not saying this from an egotistical standpoint — there's not a lot of bands that keep the audience engaged like we do from song one to song 13, 12, 10… whatever, how long we play," he continued. "I work extra hard to make sure that in between every song, there's a FOZZY chant. And it doesn't take much to educate people. All you've gotta do is just hit your ear a couple of times… It's very easy: 'FO-ZZY.' And so for the whole show, people are involved and engaged. I like that. Because, especially when you play a festival, there's a lot of people listening and watching, like, 'That band's got noise the whole show. Who is that band?' And we work hard at it, and you have to work hard at it. But every song has an element to it that enables the crowd to stay engaged. And that, to me, is the true secret of a great rock and roll band.

"It's interesting: today is the 33rd anniversary of what I consider to be the greatest gig of all time: QUEEN at 'Live Aid'," Jericho added. "It was a 22-minute set… maybe not even — 20-minute set, 'cause I think 20 minutes was the max they could play. And you had a band that was kind of a little bit down and out, and they were slotted in the middle of the day, after U2 and before Sting and Elton John and all the biggest of the day, and they were told by ['Live Aid' organizer] Bob Geldof — I know this, 'cause I've studied it, and I even talked to Brian May about it — 'Go up there and just play the hits. I don't want obscure [songs]. I want hit, hit, hit, hit, hit and come back off.' And that's what they did. And [QUEEN singer] Freddie Mercury took control, and at the end of that 20 minutes, QUEEN was back on top — from a 20-minute set. And there's no pyro. The stage… It's hilarious when you watch it; there's a bunch of guys in white pants and white shirts filming it, and there's people kind of hanging out… It's very hodgepodge; it looks basically like a rehearsal. But when they started playing, and they opened with 'Bohemian Rhapsody', which is weird, but they just kept going, it is a textbook lesson from the great Freddie Mercury on how to command an audience and how to steal the show."

FOZZY's latest album, "Judas", came out last October via Century Media. The production duties on the disc were handled by Johnny Andrews, who co-wrote FOZZY's "Lights Go Out" track back in 2014 and has written songs with the likes of ALL THAT REMAINS, THREE DAYS GRACE and HALESTORM in the past.

Jericho recently told WDHA-FM 105.5 FM that the band will re-team with Andrews for its next album.