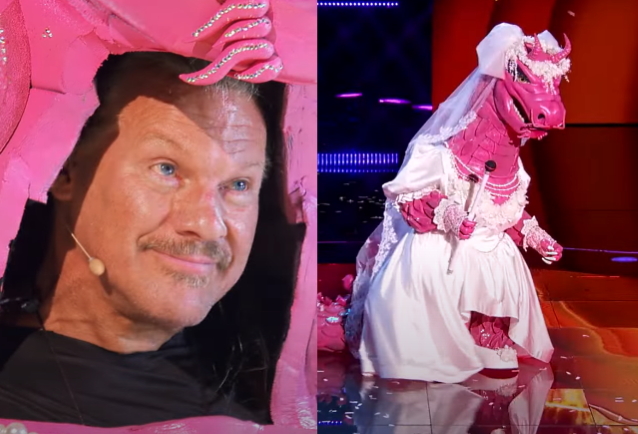 FOZZY frontman and wrestling superstar Chris Jericho was revealed to be the contestant dressed as a bride on Season 8 of reality singing competition "The Masked Singer".

Based on an international hit, "The Masked Singer" features celebrities facing off against one another with one major twist: each singer is shrouded from head to toe in an elaborate costume, complete with full face mask to conceal his or her identity. Ken Jeong, Jenny McCarthy, Nicole Scherzinger and Robin Thicke serve on the panel and play detective, alongside host Nick Cannon.

Bride returned after beating Gopher and Venus Fly Trap in the previous episode but was eliminated, along with Avocado, while Snowstorm moved on. Avocado was radio personality and comedian Adam Carolla.

In Bride's clue package, she stated: "Dearly beloved, we gather here tonight for Hall Of Fame Night, but I vow to rock. I'm always telling feel-good stories, but let me explain how I ended up here, alone, at this junkyard wedding. I have a rugged personality, I live on the road selling out arenas and I have an appetite for destroying things. So I'm notorious for being in some of the messiest feuds. I've gone the solo route, and I've come here to master. Master a new commitment with all you 'Masked Singer' freaks. So tonight, here comes the bride!"

Asked by TV Insider what made him say yes to doing "The Masked Singer", Jericho said: "Over the last few years, I've kind of been connected with the show. I know a couple times, the judges guessed that it was me a few seasons ago. I know Jenny did, maybe last year. And the producers, as a result, asked me to do a couple tweets for the show — 'you never know who it might be' type of thing — so I kind of was already in 'The Masked Singer' universe, if you will. So when I finally got the opportunity to get asked, it was kind of a no-brainer. Because, at first, I thought the show was ridiculous. Who would ever watch it? It's so stupid. This is dumb. And then I realized there's a real charm to it and it looks like it'd be a lot of fun. So when I finally got the call, I was, like, 'There's no reason not to do it; now that I understand what the show is, let's go have some fun with it.'"

Regarding his costume, Jericho said: "The thing is, too, you couldn't just put anybody in that costume. It had to be someone that had a little bit of strength because it was very hard to maneuver. It really was like Godzilla from the old Japanese flicks from the '50s, where there was actually a guy in the costume stomping on the miniature city, and that's exactly what it was like. It was hard to move in at first, but then I figured out a way to maneuver it to where I could actually get some action out of it. It was hard to walk. It would probably take five minutes to walk to [the] stage, whereas without the costume, I could probably get there in 30 seconds. But that's kind of part of what made it fun and special. I was able to find a way to move it and basically dance with it in a lot of ways. And I was just starting to get into the vibe of it, which is one of the reasons it bugs me that I got eliminated because I thought I could do some cool stuff with this more in the future. Every time I put it on, I figured out a new way to move and make it come alive and animate it more."

As for the fact that no one on the panel guessed him, Chris said: "Automatically, people think it's going to be a girl when you're inside a costume called the Bride. I think it freaked them out when they realized it wasn't a lady, and that's also why I used the British accent — even though it's a Nigel Tufnel, David St. Hubbins 'Spinal Tap' English accent. It's still not what you would expect.

"It's so obvious it's Jericho in my head. Thousands of fans on Twitter and Instagram were, like, 'Oh, It's Jericho,' but if you don't know FOZZY, if you don't listen to my band, you might not recognize my voice right away and the fact that I'm dressed up in a bride dress and the fact that I have an English accent, it's kind of leading people down different paths. And that was kind of my mindset, which worked, especially with Jenny, since she had guessed me before, and I know her. I've done her show, she had a podcast or something a couple years ago. So if she already guessed it was me once and she spent some time with me, it might not be too far out of the question to think she might recognize me right away, which she didn't."

Bride was the 16th act eliminated from Season 8 of "The Masked Singer".