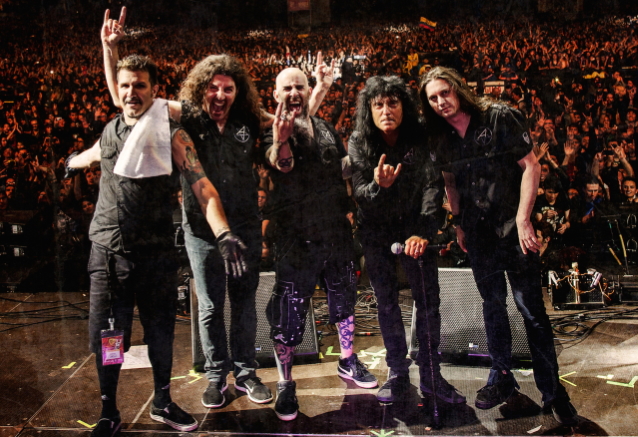 FRANK BELLO: ANTHRAX's 1992 Split With JOEY BELLADONNA Was 'Tough' But 'Needed To Happen'

ANTHRAX's Frank Bello has commented on the band's 1992 split with singer Joey Belladonna, saying "it was tough, but at that time that needed to happen." The bassist reflected on Belladonna's exit while chatting to Eonmusic about his just-published autobiography "Fathers, Brothers, And Sons - Surviving Anguish, Abandonment And Anthrax". Frank also spoke about how much his loves both eras of the band: the Belladonna years, and the John Bush period, which ran from 1992 until 2005.

Said Bello: "I see ANTHRAX as two different bands — as a fan, not only as a bandmember. I just think they're two different bands that I'm a big fan of. I really love all the songs from each band. With John, you have a different voice — you have more of a raspy voice — and Joey's got the cleaner [tone]."

Going on to talk about the Bush-fronted catalog, Bello said: "I really enjoy — now I can listen to it — seeing John. I love John. This is all a family thing, you know what I mean? Sometimes families separate and come back. With John Bush, that was a good time in our life."

He continued: "We came back with Joey, this is the ANTHRAX that we know and love, and I love the John Bush ANTHRAX, so for me, it's a win-win. People have their favorites — I get it — but for me, both are my favorites because I think there's such a great catalog of music, and I really enjoyed both terms."

When asked how it was for him, personally, when Belladonna departed, he admitted: "It was tough. Nobody wants to make that move. It was a very tough time in the band. But you know what, at that time, that needed to happen."

Finally, when asked what his favorite Bush-era tracks are, Frank offered: "'Room For One More', 'Only'. There's the big ones. There's just so many. The thing is, I'm proud to say in my band, ANTHRAX, there's a plethora of songs that I would love to play. 'Inside Out', I love that song. It's just a fun song, it's heavy as hell, it punches you in the face. There's so many like that. I can go back and look at these records, and for me, when I think of these songs it brings be back to the studio time and then the writing of it. We've had nothing but great times in the history, writing this stuff and recording them."

Back in March 2010 — just a couple of months before Belladonna rejoined ANTHRAX — ANTHRAX guitarist Scott Ian and his wife Pearl Aday appeared on an episode of VH1's "That Metal Show" and took part in the program's "The Throwdown" feature, where the guests and the hosts debated who was the best singer for ANTHRAX: Bush or Belladonna. Countering co-host Eddie Trunk's point that ANTHRAX was in a unique position with Belladonna in the band of being able to "play incredible speed metal" while having "someone who could sing like a bird," Ian said: "We didn't need a bird; we needed a lion." After Pearl offered that she was a "huge fan" of "The Greater Of Two Evils", a collection of re-recorded older ANTHRAX tunes with Bush on vocals instead of Belladonna, Ian said: "And that's the way we, as ANTHRAX, wanted to hear those songs."

Speaking to Radio Metal in August 2011, ANTHRAX drummer Charlie Benante was asked about Ian's "That Metal Show" comments. He said: "I think Scott had to eat some of the words he said about that. But he only said that because I think he left things off with Joey kind of bad, and their relationship wasn't very well back then when he said that. And I think Scott just harbored some ill feelings towards Joey and I think that's kind of why he made that statement, you know?"