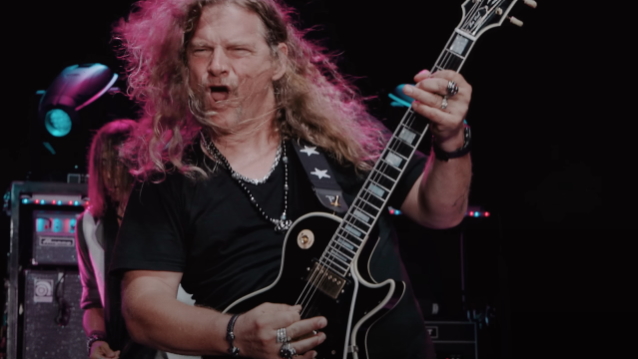 FRANK HANNON On TESLA's Pandemic-Related Break From Touring: 'It Was A Very Bizarre Time'

In a new interview with Rock Show Critique, TESLA guitarist Frank Hannon was asked if he and his bandmates used the coronavirus downtime to stay creative and work on new music, as many other groups did during the same period. He responded (as transcribed by BLABBERMOUTH.NET): "For us, COVID was an interesting thing. It was the opposite, really. Because none of us got COVID during the downtime and we all really used it as a break that we needed, because we had been touring solid up until the COVID shutdown, opening for DEF LEPPARD and doing that 'Shock' album and opening for STYX and then going out on our own. We had worked non-stop consistently for about — well, since we got back together in 2000, really. We put out the 'Into The Now' album and the 'Forever More' album, and then [guitarist] Dave Rude joined the band in 2005. And non-stop, non-stop until COVID-19 hit in 2020 and shut everything down. So, actually, we took a break from each other at that point. And then, when we did decide to get back together, when the COVID thing was just about over, we all got COVID [laughs] — we all got sick and had to cancel the tour in August [of 2021], right when we put out our song 'Cold Blue Steel', at the very end of the whole COVID thing. So it was a very bizarre time, let me just leave it at that."

Earlier this year, Hannon admitted to TotalRock that he "denied" COVID-19's "existence for the first year of it, even though it was on the news and we were hearing about it. We were very lucky for a long time and didn't catch it. But then we all did catch it in August [of 2021], and it set us back for the whole rest of the year last year, and we were all very sick from it."

Hannon admitted that COVID-19 hit him "hard. It felt like it aged me a little bit," he said. "I still feel it a little bit in my lungs; my brain is a little cloudy, which is okay — I'm used to that anyway. [Laughs]"

In August 2021, TESLA announced it was postponing a few shows after Frank tested positive for COVID-19. At the time, Hannon wrote in a social media post that he had "not been able to move all week" and revealed that he woke up with a 102-degree fever and could "hardly breathe" on the day that TESLA was scheduled to leave for tour.

Hannon later opened up about his COVID-19 battle in an interview with Marci Wiser of the 95.5 KLOS radio station, saying: "We went through COVID hell, and luckily none of us died from it. I just lost another friend who died from COVID. This is a real thing, man. People that are anti-vaxxers and all that — I was on the wrong side of that fence, listening to all the baloney. But we went through it and we survived it.

"Our friends in STYX and our friends in these bands that have been successfully touring, they've given us some advice that we follow [while we are on the road now]," he continued.

"As much as you hate wearing a mask, you've just gotta do it when you're close to people. And so we're doing that. We're all vaccinated now. And we're being careful but we're trying to live our lives too."

Hannon also elaborated on his battle with COVID-19, saying: "I wanna describe it, 'cause I got some flak from some clown on the Internet, saying, 'All you had was the flu. All it is is the flu. Quit making a big deal about it.' And that's the biggest crock. I'm telling you, man — it was a month of hell. It was a hard one.

"It affects everybody differently," he continued. "Like I said, unfortunately, sadly a lot of people are dying from it. But for me, it was like a month-long hangover. Imagine drinking all the tequila and whiskey and smoking a pack of Pall Mall non-filters for three days — imagine that — and then waking up hung over from that for a month. That's what it felt like."

Last September, Hannon told Meltdown of Detroit's WRIF radio station that he "got vaccinated" before going on the road with TESLA, but admitted "it was a little too late. I was not wanting to get vaccinated, and I put it off too long. I got vaccinated and about a week later I played a gig and caught COVID and took it to the band by accident. And everybody got sick. It knocked me down for a month, man. It was a month of hell, not being able to breathe and in a lot of pain."

He continued: "People dismiss it as being, 'Oh, it's only a flu,' or, 'It's a cold,' or whatever, but I just lost three more friends — people in the industry that have died from it. So it's a very serious thing. And I don't take it lightly anymore, that's for damn sure."

TESLA played the first two shows of its summer 2021 tour without Frank. Filling in for him was Howie Simon (JEFF SCOTT SOTO, GRAHAM BONNET, STRYPER),who previously stood in for Hannon in September 2018.

"Myself, I didn't even do one show [of the summer run]," Frank told WRIF. "The morning that we were leaving to go on tour, I came down with a 102 fever. So I called one of my friends that plays guitar, and he filled in for me. They did another show up in Oregon, and they got sick. So we got the kibosh put on TESLA right away."

TESLA's latest album, "Shock", was released in March 2019 via UMe. The follow-up to 2014's "Simplicity" was produced by DEF LEPPARD guitarist Phil Collen.

Last September, TESLA drummer Troy Luccketta announced that he would "take a little time from the road" to spend with family and friends. He is being replaced at TESLA's gigs and in the studio by Steve Brown, the younger brother of former DOKKEN drummer Mick Brown.