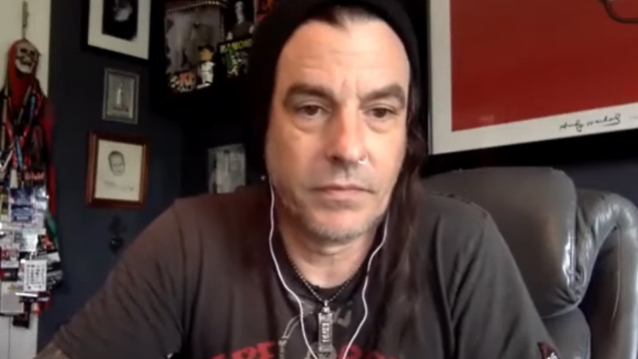 SKID ROW's RACHEL BOLAN Blasts Online Haters: 'How Miserable Of A Bastard Do You Have To Be To Do That?'

On the latest episode of the GUNS N' ROSES-centric "Appetite For Distortion" podcast, SKID ROW bassist Rachel Bolan spoke about the incessant amount of criticism he and his bandmates have received in the recent years, particularly as they have gone through several singer changes. He said (as transcribed by BLABBERMOUTH.NET): "We were under a microscope — and we still are, to a degree — but we were under a microscope and the scrutiny was just ridiculous and unwarranted. We were doing what we were doing. We were in a rock band. People were saying, 'Hang it up. Give up.' I'd sit there and think. I'm, like… It's pretty funny that people were just saying, 'Give it up. Hang it up.' This and that. It's, like, okay, what do you do for a living? Say you're a roofer. Give it up. [Laughs] You know what I mean?! You're telling someone to give up something, their passion and all that."

He continued: "At first [all the criticism] kind of bothered me, and then just in talking to other guys, like friends that are in bands, popular bands, they were, like, 'Dude, go on any message board anywhere. Go on the NASCAR message board. Go on a baseball, for a team, go on their message boards, if they have one. It's the same shit everywhere, man. It's the same shit. People just can't help being like that.' Some people — not all people, of course. But people just can't help it. Here is their platform to get noticed — whether it's just one sentence, one second, whatever it is, here is their platform to get noticed."

Bolan went on to say that he has "a theory" about online "haters." He explained: "They should all know that there's probably 99.9 percent of us that read the comments for sport, and we get a lot of laughs out of 'em. I don't think that's their goal. But for a person to go on a public forum… Granted, they're not buying ad space on TV, so it's not… But for a person to go on a public forum to just purposely degrade and criticize a complete stranger… They may have followed the band, but if we ran into each other, I wouldn't know that person 'cause they're a stranger. So for them to go [online] and spend all that energy and that time to sit down and tell someone how much they suck is, like… How miserable of a bastard do you have to be to do that? And when they go to bed, they're that miserable bastard. When they wake up the next morning, they're still that miserable bastard. The big difference is when I go to bed and wake up the next morning, I'm in SKID fucking ROW. You know what I'm saying?! [Laughs]"

Rachel added: "And here's the thing, too. At times I'm, like, 'Man, I kind of feel sorry for this person,' and not in a pathetic way. But I'm, like, 'What is their life like?' I start thinking about it. And then I'm, like, 'Wait a minute. They're talking shit about me. Why do I care?' [Laughs] And you can't let stuff like that affect you, because you're doing what you love. Hopefully they're doing what they love."

SKID ROW new album, "The Gang's All Here", will arrive on October 14 via earMUSIC. The group recorded most of the LP in Nashville, Tennessee with producer Nick Raskulinecz, who has previously worked with FOO FIGHTERS, STONE SOUR, HALESTORM, EVANESCENCE, RUSH and ALICE IN CHAINS, among many others.

Singer Erik Grönwall joined SKID ROW in January as the replacement for ZP Theart, who had been in the group for more than six years. Theart played his final gig with SKID ROW in February before being officially given the boot.