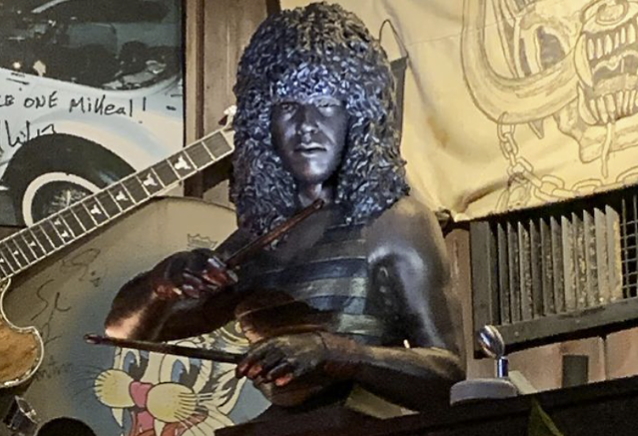 FRANKIE BANALI Bust Unveiled At Rainbow Bar & Grill On What Would Have Been His 70th Birthday: Video, Photos

A bust of late QUIET RIOT drummer Frankie Banali was unveiled at a private event at the Rainbow Bar & Grill in West Hollywood, California on Sunday, November 14 on what would have been his 70th birthday.

Frankie, who joined QUIET RIOT in 1982 and played on the group's breakthrough album, 1983's "Metal Health", died in August 2020 after a 16-month battle with pancreatic cancer.

One day after Banali's passing, his wife Regina spoke about plans for his memorial service during an appearance on SiriusXM's "Trunk Nation With Eddie Trunk". She stated at the time: "Funnily enough, he had already bought and paid for and planned his entire services at Forest Lawn [cemetery in Los Angeles] before his [cancer] diagnosis. He was gonna get the same kind of funeral that Ronnie [James Dio] got and Jimmy Bain and all those funerals that we've been to many times. He was saying we're gonna rent the [legendary West Hollywood restaurant and bar] Rainbow and have laminated passes and [have a] send-off in the rock and roll way that he arrived in L.A.," she continued. "He had a lot of history with the Rainbow."

Prior to Sarzo's return, Wright had been a part of QUIET RIOT, on and off, since 1982, having initially been involved in the "Metal Health" recordings (he played bass on the tracks "Metal Health" and "Don't Wanna Let You Go"). Guitarist Alex Grossi was in the last version of the band, from 2004 through 2007, before Kevin passed away, and was asked by Banali to return in 2010.

What a party! Happy 70th Birthday @fbanali !! What an honor to be invited to this wonderful event and celebrate the great Frankie Banali! Cheers 🥂 #frankiebanali #rainbowbarandgrill #quietriot #bangyourhead

Stopped by Rainbow Bar and Grill to pay respects to Frankie Banali.
His celebration of life was held there tonight.
His...

Packed out Rainbow Bar and Grill this evening for Frankie Banali,s Birthday !

Hangin with my dear friend Glenn Hughes @glennhughesonline @thedeaddaisies at Frankie Banali Celebration Of Life at...