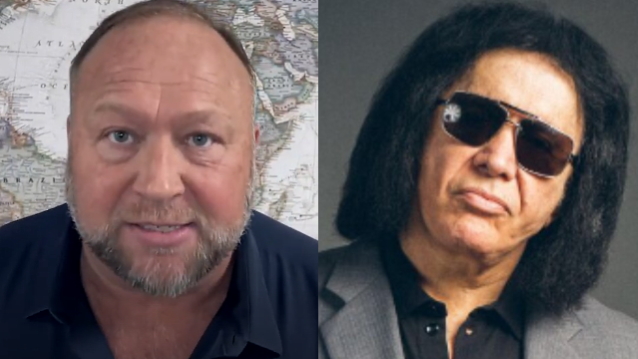 ALEX JONES Blasts GENE SIMMONS Over Anti-Vaxxer Comments: 'Are You Stupid Or Are You Consciously Evil?'

In an appearance on Talkshoplive's Rock 'N' Roll channel last week, the KISS bassist and vocalist said that many people were turned away from the band's recently completed Kiss Kruise because they were not vaccinated. All guests on the cruise, which was on a Norwegian Cruise Line boat, were required to be vaccinated against COVID-19.

"If you're willing to walk among us unvaccinated, you are an enemy," the 72-year-old Simmons said on November 10.

"This whole idea, this delusional, evil idea that you get to do whatever you want and the rest of the world be damned, is really terrible," he added. "We've got to identify those people and bring them out into the open so you know who they are."

Jones, who runs a web site which has been repeatedly accused of disseminating fake news and conspiracy theories, responded to Simmons's comments via a video message on the Infowars YouTube channel. He said (as transcribed by BLABBERMOUTH.NET): "I've got a very important message for Gene Simmons or, as he's known, the Demon. You claim that we're evil because we don't want you and Big Pharma to literally rape us with your Frankenshot GMO. And then you claim that we're gonna get you sick and you're gonna die if we don't take the shot. I thought the shot protects you. They admit it doesn't protect you. That was all a lie. In fact, it doesn't give you a little bit of protection. It actually lowers your immunity. That's in the real studies.

"So, I ask the question: are you stupid or are you consciously evil?" Jones continued. "Either way, it doesn't matter, because you're literally out there promoting to the world that I need to be forcibly injected with this garbage. That is a declaration of war against humanity, Simmons, and you're on the wrong side of history."

Scientific data shows that the COVID-19 vaccines are overwhelmingly safe and effective and have reduced hospitalizations and deaths.

The effectiveness of the Pfizer-BioNTech COVID-19 vaccine in preventing hospitalization and death remained high at 90% for at least six months, even against the highly contagious delta variant of the coronavirus.

More than 195 million people in the U.S. are fully vaccinated against COVID-19 as of November 14 — about 59% of the total population, a Centers for Disease Control and Prevention tracker shows. In addition, vaccination rates are uneven throughout the country, so some communities are closer to herd immunity than others.

Back in August, Simmons tested positive for COVID-19 despite being vaccinated. His bandmate Paul Stanley also caught the virus, leading the band to postpone a handful of concerts.

Late last month, Rolling Stone magazine published a story in which a group of KISS roadies suggested that the lack of COVID protocols enforced on the band's "End Of The Road" farewell tour led to the death of a longtime guitar tech, 53-year-old Francis Stueber. Stueber died of coronavirus in his Detroit hotel room on October 17, just two days after being quarantined. The crew members claimed the tour didn't take strict enough safety measures, including not testing everyone regularly. In addition, some crew members allegedly disguised their illness and/or faked vaccine cards.