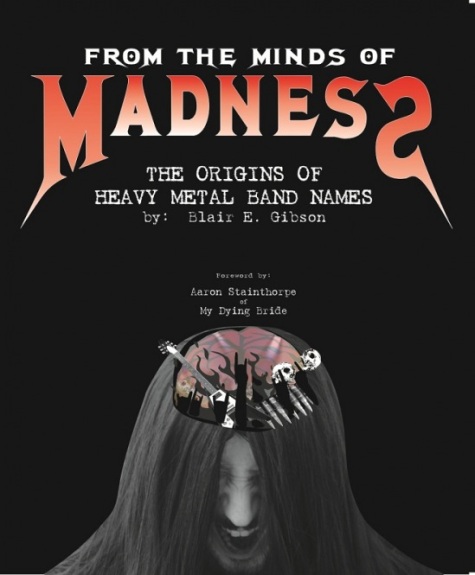 'From The Minds Of Madness: The Origins Of Heavy Metal Band Names' Book Now Available

Author Blair Gibson released "From The Minds Of Madness: The Origins Of Heavy Metal Band Names" on January 6 through Rymefire Books.

Commented Gibson: "I contacted over 200 bands of various genres of the heavy metal realm and came up with the origins of 234 bands with direct quotes from the bands. I had been contacting these bands for over a year and narrowed it down to these responses. I asked them how they got their name and why they chose it.The book covers all metal genres — from black metal to power metal to thrash metal, and every genre in between."

The "From The Minds Of Madness: The Origins Of Heavy Metal Band Names" foreword was written by Aaron Stainthorpe of MY DYING BRIDE.

Regarding how MY DYING BRIDE got its name, Stainthorpe wrote, "The name of the band is inexplicably linked to the death of my mother back in 1988, which plunged my life into complete and inescapable darkness and grief, from which I have yet to fully recover.

"When our group came to fruition, a name was sought and being 1990 the death metal scene was snowballing to greatness so we naturally shunned all the other corpse murdering virgin slaying bible burning nonsense for something much more heart rendering, as that was where our musical outpourings would come.

"With great tragedy so close to me, a name akin to my feelings was required, of lost love and hopeless dreams. Two names were banded about; MY DYING BRIDE or MY DYING CHILD, and BRIDE won out due to the utter forlorn state one would succumb to at such a time; and the fact that I am a diehard romantic lost in 17th century England unable, nay, unwilling to escape to modernity.

"MY DYING BRIDE compose tunes in dark and melancholic ways that leave many a folk whimpering and heart-weary and yet, they always come back for more because as we all know too well, a tear shed is a lesser burden to carry."