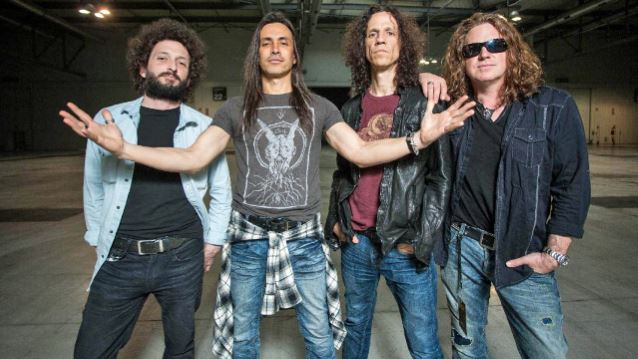 In a brand new interview with Myglobalmind, EXTREME frontman Gary Cherone spoke about how performing the band's "Pornograffitti" in its entirety in 2015 to celebrate the LP's 25th anniversary influenced the songwriting process for EXTREME's next effort. He said: "I think it had an effect with Nuno [Bettencourt, guitar] on some of the new material. We aren't rediscovering our roots or anything like that. It's just that with the past couple of years touring that record, all of those elements are there in the new material. It's driven by guitar riffs with the harmonies and the big choruses. So it has influenced the new material."

Asked if he had a title or release date for EXTREME's next album that he could share, Gary said: "No, we haven't had those fights yet. [Laughs] Usually, the title will come during the process of writing the songs. So nothing is there yet. I would like to give you dates, I just don't know dates. There will be new music by the time we go out again, as we are just concentrating on new material before we do go out on the road next year."

Cherone recently told Metalholic about the musical direction of the new EXTREME material: "There will be, like all EXTREME records, familiar elements, but also stuff… Over the years, when Nuno and I write, we're affected by our environment and music changes throughout the years, so those elements… There will still be some new elements to the band as well. Hopefully that always happens; you always wanna grow and evolve and move on. But the guitars will be there, the harmonies will be there, the songs, the hooks, the lyrics… There'll still be elements of the past, but certainly new elements [as well]."

EXTREME's first studio album in thirteen years, "Saudades de Rock" (pronounced "sow-dodge") was released in August 2008 on Open E Records and distributed by Fontana. The European version of the CD included a bonus track, the "Americocaine" demo from 1985, the very first studio recording of EXTREME.