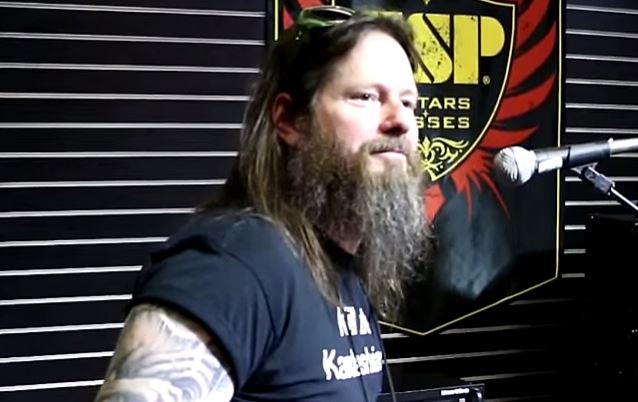 EXODUS guitarist Gary Holt, who has been touring with SLAYER for the past five years as the replacement for Jeff Hanneman, says that SLAYER's forthcoming album is "phenomenal" and a "monster," and predicts that the band's fans "are gonna shit their pants" when they hear it.

SLAYER is currently putting the finishing touches on its new CD with producer Terry Date, who previously worked with the band on "Implode", a song that was made available as a free download following SLAYER's surprise performance at last April's Revolver Golden Gods awards in Los Angeles.

During his appearance at the ESP booth at last month's NAMM show in Anaheim, California, Holt stated about the upcoming SLAYER album: "Kerry [King, SLAYER guitarist] wrote the whole record, and it's phenomenal. It's been an honor to watch that guy work as hard as he does. People don't understand how much he lives, breathes and bleeds for SLAYER, and he, through all the adversity, has really made a monster record. And when people are gonna hear it, they're gonna shit their pants. I mean, all I had to do was go in and just play fast and grab a whammy bar a bunch of times, and that was it."

Holt previously told Liquid Metal's "666-LIVE" call-in show: "'Implode' is a great song. I really love it, [and] it's a lot a fun to play. [But] compared to the other stuff Kerry has written, it's nothing; [it] doesn't even touch it."

Holt went on to describe the new material as "a little bit of everything, but everything I'd reference to is 100 percent SLAYER. I mean, it's crushingly heavy and it's dark and sinister, and it's everything you hope a SLAYER album should be. There's no ballads!"

Gary also spoke about his contribution to the recording process, explaining: "I got the call [to go down to the studio] and I went down to do solos and I did nine leads in one day and I went home. Everybody was, like, 'Damn, that was crazy,' and what I did was I blew my left wrist out. I was shredding so long and hard and I just wanted to get through them. I felt some pain halfway through it, and I just kept going, and the next day I couldn't even move my hand."

Holt added: "Kerry asked me if I wanted to revisit any of them this week and go down and do any more tracking, and I hadn't listened to the leads since a couple days after I did them, which was probably a while ago. I listened back to them, not even remembering what I did, and I was just shredding, man. [So I'm] not even gonna mess with them."

A new SLAYER song called "When The Stillness Comes" will reportedly be made available exclusively through Scion Audio/Visual (a.k.a. Scion AV),the in-house record label and lifestyle marketing division of the Scion marque produced by Toyota Motor Corporation for the North American market.

Asked what Holt's contribution would be to the new SLAYER album, Kerry told Canada's Metro in a 2013 interview: "I've told Gary that I'd like him to play some leads, just to keep it interesting.

"We've always been a two-guitar attack, so if you're looking to have a segment like the 'Angel Of Death' lead trade-off, you can't do that with one guitar.

"As far as Gary being a contributing writer, number one, fans aren't ready for it, and number two, that's like throwing somebody to the wolves.

"I think if there's another record after this one, and Gary is still with us at that point, I think that will be a time where I say, 'Hey dude, feel free to throw any riffs my way if you're interested'."