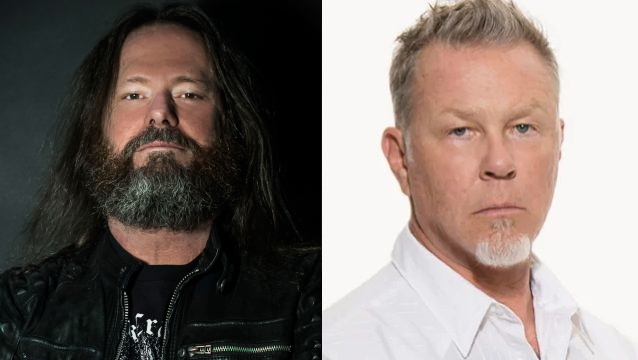 In a new interview with Metal Hammer magazine, Gary Holt once again reflected on EXODUS's legendary New Year's Eve gig in San Francisco with METALLICA, as the two bands rang in the year 1986 along with MEGADETH and METAL CHURCH.

"We stomped them into the dirt," Holt said. "We were getting wasted after the show, and James [Hetfield, METALLICA frontman] was laughing and saying, 'Haha, that's the last time you guys'll ever support us.' And it was the last time we ever supported METALLICA."

When Metal Hammer writer Dave Everley asked "The $64,000 question: no EXODUS, no thrash scene. True?" Holt replied, "Absolutely. I'll own that. We created the violent scene."

"The scene was rad," Holt added. "You could go to a different club five nights a week and never see the same band twice. There wasn't thrash metal competition, 'cause in the beginning there was only us and METALLICA. The first time I ever heard with them was when we played with them, and it felt like looking in a mirror. Later on, there was some competition. The bands were all friends, and we hung out together, but EXODUS owned [legendary San Francisco Bay Area club] Ruthie's. Everybody was gunning for us, but nobody could take us."

Holt's latest comments echo those he made back in February when he told the "Alive & Streaming" YouTube series about EXODUS's 1985 concert with METALLICA: "We crushed METALLICA. And look, I'm not gloating — we crushed 'em, and they knew it. It was their big homecoming. They just finished recording 'Master Of Puppets', and we came out, and we had more amps, we had a bigger riser. We came out looking like the headliners. And we were partying hard after, and James comes up, and we were just getting wasted. [And he said,] 'That'll be the last time you guys open for us.' And it was. [Laughs] We never played with METALLICA again until in the recent decade, and that was, like, festivals somewhere."

According to Holt, he still gets along great with all the members of METALLICA. "I love 'em to death, and I'll always support 'em and always give them all credit where credit's due," he said. "I consider 'Master Of Puppets' the greatest metal album ever made. Nobody's ever come up with anything close to it. Maybe close would be JUDAS PRIEST 'Stained Class'. But I give 'em all respect. Even with 'St. Anger', I always said, yeah, if they made it sound right, it wouldn't be so bad. [I saw a thing] on YouTube, some guy re-recorded the whole album, but did it with a proper drum sound and guitar sound, and the songs are killer… I never listened to 'Lulu', because I don't want it to sully my opinion of the band I admire so much. [Laughs]"

"Lulu", METALLICA's controversial collaborative disc with Lou Reed, polarized fans around the world and earned the band some of the most scathing reviews of its career. The effort featured the late THE VELVET UNDERGROUND frontman's spoken-word poetry and lyrics combined with METALLICA's musical assault for a jarring experience that didn't sound like anything METALLICA had ever attempted before.