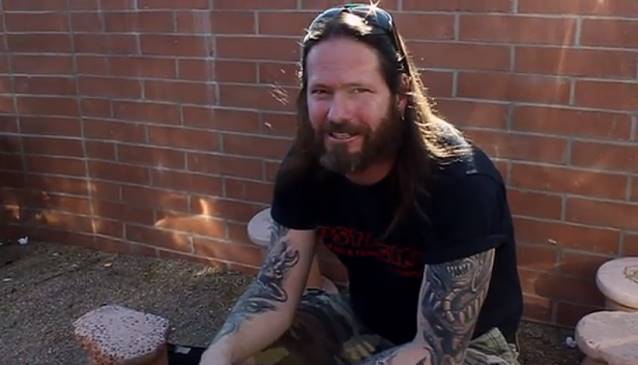 Kevin J. Wells of Washington Times recently conducted an interview with EXODUS and SLAYER guitarist Gary Holt. A couple of excerpts from the chat follow below.

Washington Times: Is there a new EXODUS record in the works?

Gary Holt: Right now, I'm starting to compile riffs and get to that stage and I'm gonna continue writing while out the upcoming SLAYER tour as well. I pretty much have a break from the world of SLAYER 'til next April. So, I'm using this time off to make sure that I get that next EXODUS record done.

Gary Holt: The recording for that should start sometime maybe by the end of this year. So, hopefully, then kill two birds with one stone and manage to keep both bands touring at the same time. Who knows?

Washington Times: Will you do any of the recording with SLAYER?

Gary Holt: It looks like I'll probably be doing solos on the record, but the songs are all written. Kerry [King] will handle all that stuff. My plate's kind of full anyway, so I'll probably be bouncing back and forth from L.A. to San Francisco.

Washington Times: Tom Araya said that there are a few Jeff Hanneman songs that he was working on. Have you had a chance to hear them and has SLAYER done any work on them?

Gary Holt: No. I know they have some stuff, you know, I think the bulk of whatever's left over was stuff that remained from "World Painted Blood", but I haven't heard it yet, so I can't comment on it. I'm sure it'd be super cool to have some of his last final works end up on the SLAYER album. That would be awesome.