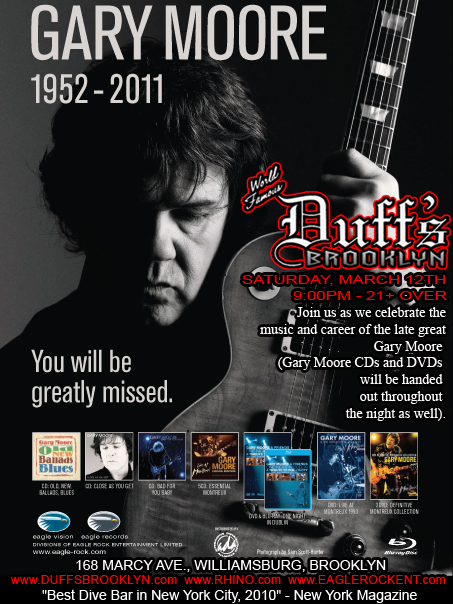 GARY MOORE Tribute Night To Be Held At DUFF'S BROOKLYN

A tribute night to former THIN LIZZY guitarist, noted session player, and blues rock icon Gary Moore will be held this coming Saturday night (March 12) at Duff's Brooklyn in Williamsburg, Brooklyn. A lot of Gary's CDs and DVDs will be played through the night, plus over 60 CDs and DVDs will be given away courtesy of Moore's label Eagle Rock Entertainment.

According to Ken Sweeney of the Irish Independent, Gary Moore was laid to rest on February 23 in a small village graveyard outside Brighton, England.

Moore's family decided to hold his funeral not in Belfast, Ireland, where he was born, but near where he had made his home in the past 15 years and where his children live.

Lily, one of the guitarist's four childen, spoke of her father as "a man with rather colorful shirts, who possessed a childlike quality and was an inspiration to many and the kind of person you could never forget."

THIN LIZZY guitarist Scott Gorham told the Irish Independent that he was unaware the service for Moore was taking place.

"No one kept me informed of any arrangements regarding his funeral," he said.

"I'll drive down to Brighton one day on my own and pay my respects," Gorham added.

Read more from the Irish Independent.